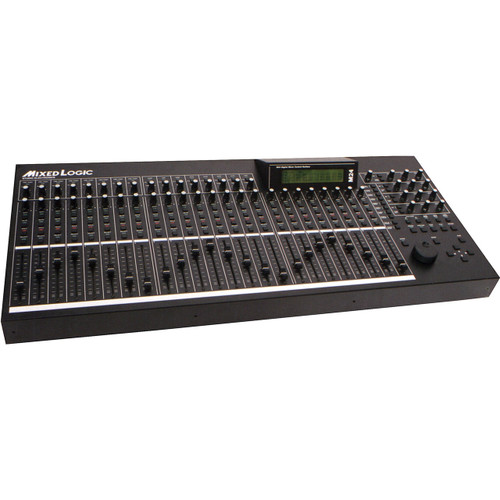 The Mixed Logic M24 Control Surface is designed to integrate with your favorite digital audio software and provide the best of both the virtual and physical worlds. The Mixed Logic M24 will complement your existing recording software, improve your efficiency and enhance your recording experience.

The Mixed Logic M24 dedicated remote control surface provides familiar hands on control for the computer based audio production environment. The M24 offers a traditional recording console style interface designed to integrate with your favorite digital audio software and provide the best of both the virtual and physical worlds. The M24 will complement your existing recording software, improve your efficiency and enhance the recording experience. The Mixed Logic M24 Control Surface is compatible with most major DAW systems. But the list is ever changing. So before you order give us a call or shoot us an email and we will be happy to confirm that the Mixed Logic M24 will work with your recording setup.

Aux Send Controls, Dynamics
The top row of the Mixed Logic M24 has 16 rotary controls and 16 switches and LEDs for auxiliary effect send control and dynamics control. The number of available auxiliary send controls per channel depends on the current host software. All 16 controls can also double for other functions including plug ins depending on the host software. Each channel in the current bank has a select switch that is used to make the Aux Sends, dynamics and EQ and plug in controls active for the selected channel. The 16 switches in the top row are used for Pre / Post select or dynamics functions and double for Window select modes, Function switch modes and Aux send mutes.

Equalizer Controls
The Mixed Logic M24 is the first control surface to feature a complete dedicated equalizer section with 12 controls divided into 4 bands. Controls are provided for Gain, Frequency and Width on each band with a band bypass and EQ type switch for each band. A soft control is provided for access to additional bands assigned in pages (software dependent) or for use as a trim control. Depending on the host software the EQ section can be configured to control a large number of software plug in effects with the ability to use the same common controls for similar functions in effects from different manufacturers across all channels. Imagine having one type of plug in EQ on several channels and another type on several channels and with the push of one switch you could jump from channel to channel and be able to instantly use the same familiar controls to control similar plug in functions.

Back panel connections
The Mixed Logic M24 has 3 midi in and 3 midi out connectors to allow for multi program use or emulation of three eight channel controllers. The accessory connector is for planned future options. The USB connector provides a high-speed connection to the host software. The USB connector is also used for software updates and several planned advanced features. The M24 has two massive internal international switching power supplies because motorized faders require well-regulated power to operate reliably. The M24 uses a standard universal power cord.

LCD Display and Scribble Strip
The Mixed Logic M24 features a 40 character by 4-line LCD display. The top row of the LCD display usually is used to display the most recent control and value including a long channel name, long control name and continuously updated control value. The next three lines of the display usually are used to display the abbreviated channel names for all 24 channels active in the current bank and act as channel scribble strips. Line 2 is for faders 1- 8, line 3 is 9- 16 and line 4 is 17- 24. The LCD has many additional modes and menus depending on the current host software. The P1 in the far right of the first row indicates the current page of controls that are active. The M24 has the ability to reassign just about every control on the unit instantly to other functions in several pages allowing the use of faders and other controls for very extensive control of plug ins and controllable instruments (software dependent) extending the total number of available controls.