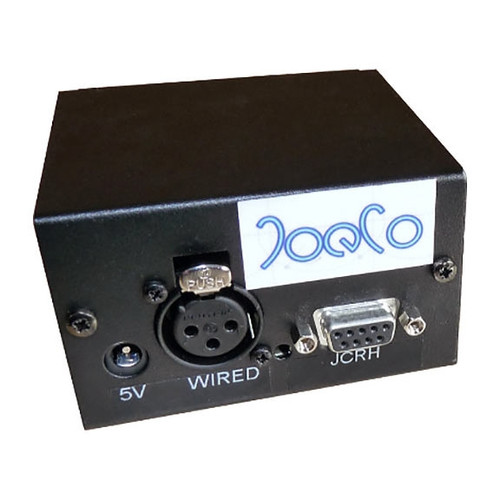 The JoeCo Multi-Remote Hardware Interface enables up to four Blackbox units to be connected, triggered, monitored and controlled via one iPad. For a simple wired connection, no additional hardware is needed. For wireless operation, the Multi-Remote can be connected to either the JoeCoRemote hardware interface or the JoeCo Bluetooth.

The JoeCo Multi-Remote Hardware Interface is designed for larger projects. It enables BLACKBOX Recorders and Players to be remotely operated and monitored via iPad. Developed for use with a range of iPad models, the JoeCoRemote software app, together with specially designed Multi-Remote Hardware Interface, offers remote control of up to four 24- channel or 64-channel BLACKBOX Recorders/Players.

JoeCoControl
Available free for Mac and PC, JoeCoControl delivers a wealth of functions and features for BLUEBOX multi-channel audio interfaces including the BBWR24B, the BBWR08MP and the BBWR24MP. A powerful but easy to use software platform designed to facilitate your workflow, the JoeCoControl is split into three modes: Live, Studio and Mix. The first assists you in live performance scenarios when you wish to record to your DAW (with USB 2.0 back-up courtesy of your BLUEBOX; the second is for tracking in the studio, with dedicated features to help you make the most of your session; and finally the third mode is for mix-down. Across those three modes users benefit from features including full control over input parameters, the creation of multiple zero latency headphone sub-mixes with control over gain, pan, solo, mute, and PFL, plus support for in-studio talkback and studio monitor switching capabilities. The JoeCoControl software also offers a dedicated transport control panel with record and stop buttons and accompanying useful disk information. Finally, Mix mode gives the ability to use a number of outputs and inputs as sends and returns for outboard equipment during mixdown.

Software App
The JoeCoRemote 3.3 offers remote control of all standard BLACKBOX and BLUEBOX transport functions (Play, Stop, Record), as well as providing access to the menu structure for changing settings, naming songs / takes and tracks, editing iXML data for Film and TV applications, etc. This latest version – optimised for use with iOS9 – also meets the increasing demands for remote control of projects involving larger track counts. Using a single iPad, users can view the input metering on up to four connected BLACKBOX or BLUEBOX units and create a real-time monitor mix using the expandable channel strips in each of the monitor windows. Multiple fader groups can be set up for easier handling. A 28dB PAD on the BBR1MP Recorder mic inputs enables mic processing features (High Pass filter, Limiter, Phantom Power, Phase Reverse), to be used on high output mics and line level inputs. Improved remote control of Player functions revolutionises creating and controlling Playlists when the BLACKBOX Player is used as a multi-channel playback device. Changes to the set list can be made on-the-fly and can also be written to both the MAIN and BACKUP disks simultaneously, ensuring that a pair of BLACKBOX systems configured as failover players are fully in sync. This enables creative set list changes to be made at a moment’s notice if required. For broadcast/film applications, JoeCoRemote 3.3 enables iXML data to be created and modified from with the software. The app also features a headphone volume control and master mix level control.

Hardware Interfaces
The standard JoeCoRemote professional hardware interface offers remote control of a single BLACKBOX. The hardware can operate as an adhoc network with the iPad at 2.4GHz or, when the WiFi is more congested, as part of an infrastructure network in the 5GHz band. There’s also the option of connecting the iPad via the supplied cable to form a wired connection. For larger projects, JoeCo Multi-Remote enables up to four BLACKBOX units to be connected, triggered, monitored and controlled via one iPad. For a simple wired connection, no additional hardware is needed. For wireless operation, the JoeCo Multi-Remote box can be connected to either the JoeCoRemote hardware interface or the JoeCo Bluetooth.