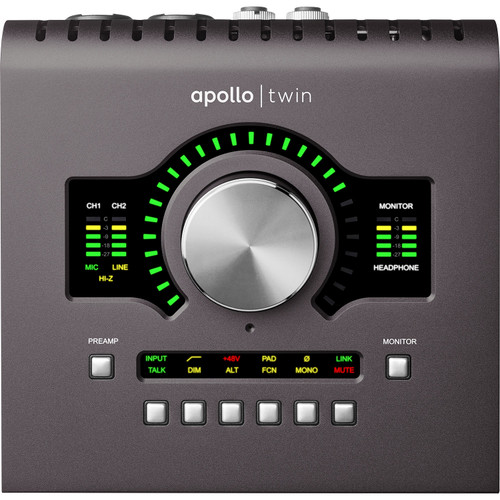 The Universal Audio Apollo Twin MKII Heritage Edition Audio Interface is a ground-up redesign of the world’s most popular professional desktop recording interface for Mac and Windows — delivering enhanced audio conversion with the tone, feel, and flow of analog recording.

Built upon UA’s 60-year heritage of audio craftsmanship, Apollo Twin MkII starts with two Unison-enabled mic preamps and stellar next-generation A/D and D/A conversion derived from UA’s flagship Apollo 8, 8p, and 16. Together with its included bundle of UAD analog emulation plug-ins — which you can track through in real time with UAD-2 DUO, DUO or QUAD Core processing — Apollo Twin MkII is born to make records.

Unison Technology: The Genuine Sound of Neve, SSL, API & Manley Preamps
Apollo Twin MkII features two Unison-enabled mic preamps, letting you track through exacting mic preamp emulations from Neve, SSL, API, Manley, and Universal Audio. An Apollo exclusive, Unison technology nails the tone of these sought-after tube and solid state mic pres — including their input impedance, gain stage “sweet spots,” and the component-level circuit behaviors of the original hardware. The secret to Unison is its hardware-software integration between Apollo’s mic preamps and its onboard UAD-2 QUAD or DUO Core DSP Acceleration. Simply place a Unison preamp plug-in on your mic input in Apollo Console software, and it physically reconfigures the Apollo interface's impedance — so you can tap into the classic sounds of the world’s most recorded mic preamps.

A Full Suite of Classic Analog Processing Onboard
Right out of the box, Apollo Twin MkII provides a suite of incredible analog emulation plug-ins including the world’s only authentic Teletronix LA-2A, 1176LN, Pultec EQs, and the Unison-enabled UA 610-B Tube Preamp. Developed by UA’s world-renowned team of algorithm engineers, these Realtime Analog Classics plug-ins set the standard by which all other hardware emulation plug-ins are judged. From the tube warmth of the Pultec EQ on guitars, to the gentle limiting of the LA-2A on vocals, your recordings will take a giant leap forward in rich, sonically complex analog sound.

Access the World of UAD Powered Plug-Ins
Beyond the included Realtime Analog Classics plug-ins, Apollo Twin MkII lets you tap into the full library award-winning UAD Powered Plug-Ins — including vintage EQs, Compressors, Reverbs, Tape Machines and more — at near-zero latency, regardless of your audio software’s buffer size and without taxing your computer’s CPU. With exclusive emulations from Neve, Studer, Manley, API, Ampex, Lexicon, Fender, and more,* it’s like having an endless analog studio, right on your desktop. And unlike competing interfaces, these DSP-powered plug-ins are also available in your DAW for mixing.

Next-Generation A/D and D/A Conversion
Of course, the heart of any audio interface is the quality of its conversion. Apollo Twin MkII improves upon the original Apollo Twin’s gold-standard audio quality with completely redesigned A/D and D/A conversion — giving you increased dynamic range and ultra-low THD. This next-generation conversion results in breathtaking clarity, depth, and accuracy in your recordings.

Apollo: The Choice of New-School Professionals
Apollo is the confirmed choice of hit-making professionals, used to record landmark albums by Kendrick Lamar (DAMN.), Chris Stapleton (From A Room: Volume 1), Arcade Fire (Everything Now), Post Malone (Beerbongs & Bentleys), and many more. The Apollo range of interfaces has earned numerous industry awards from Sound on Sound, Future Music, and Electronic Musician — as well as the prestigious 2016 TEC Award for computer audio hardware.