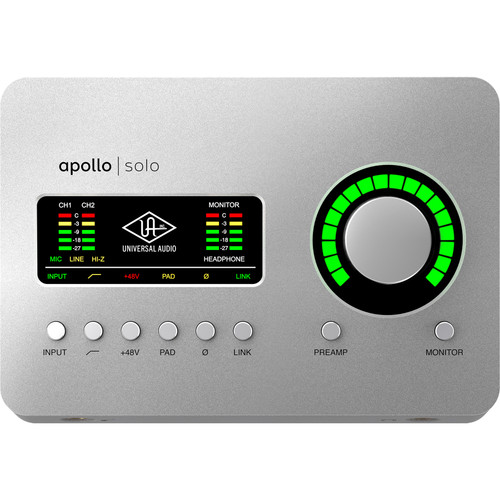 Unison™ Technology for Stunning Mic and Guitar Preamp Emulations
Apollo Solo's Unison technology gives you the tone, touch and “feel” of the world's most sought-after tube and transformer-based mic preampsand guitar amps. It includes the UA 610-B Tube Preamp, Marshall®Plexi Classic Amplifier, and Ampeg SVT-VR Classic Bass Amp plug-ins —and can be expanded with exclusive titles from Neve,®Avalon,®SSL,®Fender,®and more. The secret is a unique hardware-software integration, which adjusts the impedance of Apollo's instrument and mic preamps to match the emulated hardware —for authentic analog sound unmatched by other recording interfaces.

Realtime UAD Plug-In Processing for Recording with Near-Zero Latency
Derived from Universal Audio’s award-winning Apollo interfaces, Apollo Solo opens up a range of classic analog color via its Realtime UAD Processing. Featuring an onboard UAD-2 SOLO Core processor, Apollo Solo lets you monitor and record through the full library of UAD Powered Plug-Ins —at near-zero latency, regardless of your audio software buffer setting. It’s like having a virtual analog studio that fits in a laptop bag

LUNA Recording System with Accelerated Realtime Monitoring
Apollo Solo works with all major DAWs, including Logic Pro, Ableton Live, Pro Tools and more. But it becomes a fully integrated recording system with LUNA, a powerful free recording application for Mac from Universal Audio. Bolstered by Accelerated Realtime Monitoring,™LUNA lets you track and mix in an intuitive single-window workflow with unlimited track counts, full AU support, and access to a suite of exclusive LUNA Instruments and Extensions