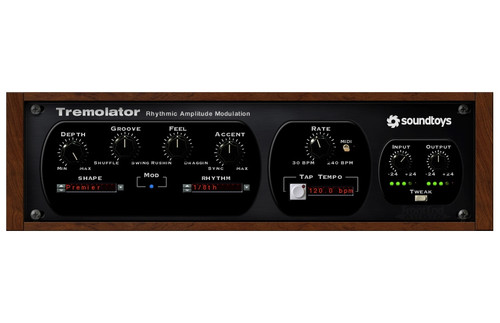 SoundToys Tremolator Plug-In brings Tremolo and Auto-Gate to your productions. Analog guitar tremolo effects and beyond with beat-synced rhythmic chopping.

SoundToys Tremolator has got you covered in the Tremolo effect department. Tremolator emulates the tremolo effect of classic hardware like the old Fender Vibrolux guitar amp, and even the great tremolo sound of the Wurlitzer electric piano.

Tremolo, the effect of oscillating a sound's volume, is one of the most popular tricks in the audio world. Tremolo (often used interchangeably to describe vibrato), is a positively ancient effect, first applied to pipe organs in the 16th century (a device known as a Tremulant).

Coinciding with the advent of recorded audio, the popularity and potential of mechanical tremolo units grew exponentially. Mechanical tremolo evolved from its initial application as an effect for the organ to become a need-to-have effect in live performance as well as just about anything laid to tape or acetate. Tremolator builds upon this long pedigree by bringing together the sound of classic mechanical tremolo along with added features and flexibility that no piece of classic hardware could have ever been capable of.

To achieve this inside the digital framework of Tremolator, first we had to start with those classics. From vintage Fender vibrato amps to the tremolo found in the Wurlitzer electric piano, we analyzed and examined what was actually happening inside these units in order to accurately recreate the properties they imparted onto audio passed through them.

What we found by analyzing the waveform changes from unit to unit was very interesting and solidified just how unique each of these pieces were. Coupled with the software's Analog Styles, which emulate the saturation and distortion profiles of various analog circuits, Tremolator gives you every aspect of the sound of classic hardware.

However, a lot of this classic technology is just that, pretty classic in comparison to what can be achieved in the modern age. While the knobs on a 1950s Fender Vibrolux did give you control over depth and speed, that was it: just two parameters. Tremolator on the other hand allows you to take that characteristic sound but utilize MIDI to lock the effect into sync with your project. Or use Tremolator's programmable Rhythm Editor to customize patterns, turning classic tremolo into modern rhythmic auto-gating. With Tremolator you can control accents, shuffle/swing to fit the groove, select waveform shape, or dive into the advanced Tweak Menu to control all dynamic aspects of the tremolo effect.

A history of pro engineers using this plug-in in their mixes being a pretty solid indicator, it's not a stretch to declare that Tremolator will find a home in many of your productions. As with all Soundtoys plug-ins, Tremolator comes with a cornucopia of very useful presets to get you up and running, ranging from the tame to the positively out-of-this-world. And if once you purchase Tremolator, it is your first interaction with it, be sure try it on a variety of source material to get a feel for how this effect can inspire and enhance. So, get to Tremolating!