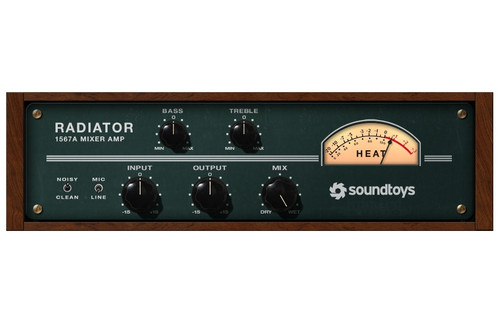 SoundToys Radiator Mixer Amp Plug-In is Tube Warmth For Your Mix. Vintage vibe, drive, and the magic tone of the Altec 1567a tube mixer. A beast on bass and drums.

SoundToys Radiator is based off of one of the warmest devices we know of: the Altec 1567A Mixer Amplifier. Radiator was designed for the very task of turning up the HEAT on your mixes. After all... Warmth: it's the elusive and hard to quantify character that we're all striving for in modern, digital productions. Right?

The original Altec 1567A hardware, introduced in the early 1960s, was a rack-mounted five-input tube mixer. It featured removable transformers, a simple two-knob EQ, and a whopping 97 dB of gain, all behind an unmistakable and very green faceplate. Altec gear, specifically the 1566A (off of which Radiator's younger sibling, Little Radiator is based) and the larger 1567A played a big part in shaping the sound of Motown between 1961 and 1964. Songs by greats like The Four Tops, The Marvelettes and The Supremes all went through the five-channel 1567A located in the control room at Motown Studio A.

By today's standards, the sound of the Altec is colored and gritty, with a generous amount old-fashioned hardware noise. The EQ was about as simple as it gets, one knob for Bass, another for Treble. As the recording industry chased ever-increasing fidelity through the 60s and 70s, these now rather antiquated tube mixers found themselves replaced with more feature-rich, transistor-based consoles by manufacturers such as Neve and API. A lot of 1567A's found their way into the PA racks of churches and school auditoriums across the USA.

Eventually, aficionados of the analog sound began seeking out the 1566A and 1567A as inexpensive sources for a real-life tube front end. Producers like Matt Wallace, Butch Vig, and Billy Bush found the warm and punchy 1567A to be a sleeper classic for injecting that nebulous concept of warmth we mentioned earlier. With bands like the Black Keys (who had a custom console made from Altec 1567As) utilizing these little pieces of studio history the demand, and price, for these funky little color boxes have soared.

Radiator brings the heat-generating properties of the 1567A to your digital setup with more options and flexibility versus the original units. In addition to being a faithful recreation of the saturation and harmonic properties of the original hardware (based on multiple 1567A and 1566A units at Soundtoys HQ), Radiator accurately models the bass and treble tone controls from the original unit. A mix control is added for easy parallel processing as well as a selectable Mic/Line mode switch mirroring the 1567A's extremely level-dependent frequency response.

With Radiator you can bring classic tube warmth to every input channel and every bus, without the hassle of procuring collector-priced hardware. Radiator and Little Radiator are the prefect tools to crank up the heat on your mixes.

What the pros are saying...

I used it on vocals, which is my favorite thing to use my real Altec box on, and it sounded f*~#ing great.
 Butch Walker  Producer/Song Writer  Weezer, Never Shout Never, Cee-Lo, Pink

Love this thing  instant vibe  I used it on drums and vocals on a mix that was very straight and polite and it added such great character to both. Really loved how it made both sound much more real and energetic.
 Billy Bush  Producer/Engineer  Garbage, Foster The People, Muse