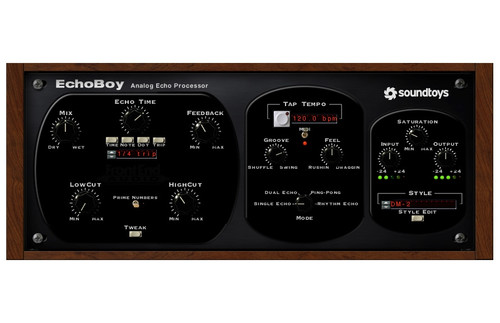 SoundToys EchoBoy Plug-In is The Ultimate Echo Plug-In. EchoBoy is decades of echo devices crammed into a single plug-in.

SoundToys EchoBoy Plug-In was designed from the beginning to provide not just another delay plug-in, but one offering complete control and the tonal options from a wide range of delay/echo devices. Since its initial release in 2006, EchoBoy has become the go-to delay tool for a staggering number of studios and producers world-wide. SoundToys went to great lengths in designing EchoBoy to accurately reflect the sound of a wealth of classic devices that have stood the test of time. We are all blessed beyond words that EchoBoy has become one of those devices as well.

EchoBoy provides the necessary controls and parameters to emulate virtually any classic or contemporary delay device. SoundToys' main goal was to provide you with not only versatile but exceptional sound: one that is truly musical, harmonically rich and with real character. Though it can do that input-sounds-like-output thing, it excels at providing an incredibly wide range of unique and analog sounding delays, each with a unique and palpable character. It has a plethora of controls allowing you to bring the kind of anomalies and character that were inherent in tape and analog devices to your projects without a warehouse full of expensive (and temperamental) hardware. You can get as tame or as wild as you want with EchoBoy. Additionally, the included Rhythm Mode provides for some truly new approaches to multi-tap delays.

Sun Ra once said, space is the place. We're confident that EchoBoy will take you to spaces and places unexplored previously. EchoBoy has a lot to offer under the hood. So, be sure to dig into the manual so you can be sure to be getting the most out of EchoBoy.