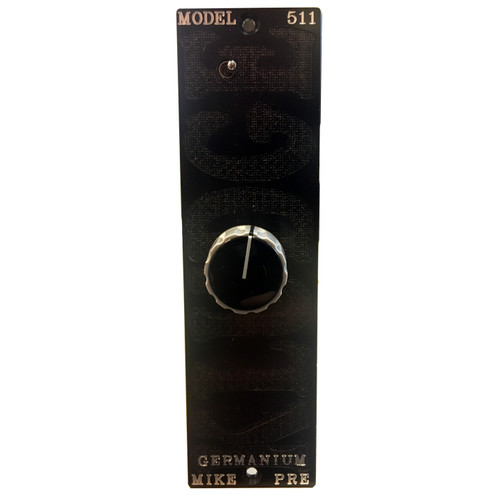 The Kludge Audio 511 Germanium Preamp fits into an API 500-series rack and delivers a smooth and dense classic sound that brings tracks to the front of the mix.

The Kludge Audio 511 Germanium Preamp is a reasonably quiet microphone preamp with plenty of gain, but with a sound all its own that you will instantly recognize. What's more, the preamplifier front end actually sounds good when overloaded; rather than an ugly buzzy overload sound, it gives a dense and mellow overload. This allows it to be used for aggressive limiting on everything from vocals to horns.

Germanium transistors were the latest technology in the early 1960s, but rapid technological evolution meant they disappeared in a few short years. This is a shame, because they offered a unique sound that was not like the modern silicon transistor sound or the vintage tube sound. When companies in the west stopped making germanium alloy transistors, Soviet plants kept manufacturing them until the 1990s and they developed these transistors to a much higher level of refinement than anything made in the days when GE and RCA were making them. We take advantage of the best germanium transistors made, along with the best of all the other components that go into our products, because we can.

Other companies make germanium microphone preamplifiers, but Kludge Audio is quieter and better and because it's in a 500-series module, it's less expensive and more convenient. Just like their equalizers, it's the best of old and new. It's a new design made with modern versions of a classic old technology, built by hand with traditional methods and solid design. It's designed as a tool for daily use in the studio and designed to last a long time in regular use.

The Kludge Audio 511 Germanium Preamp is awesome. It has all the fatness and mojo you want from a germanium preamp, and nothing to think about. You have on switch for phantom power, and one knob for gain. Turn on phantom if you need it, if not, leave it off. Then you just turn the gain knob until you have the right level - and you are done. Simply and sounds killer. What's not to love? Add in the fact Kludge uses high end components (including "the best germanium transistors made" - "these transistors to a much higher level of refinement than anything made in the days when GE and RCA were making them"), and they are all hand-built here in the USA - that's a lot of positives for this great pre.