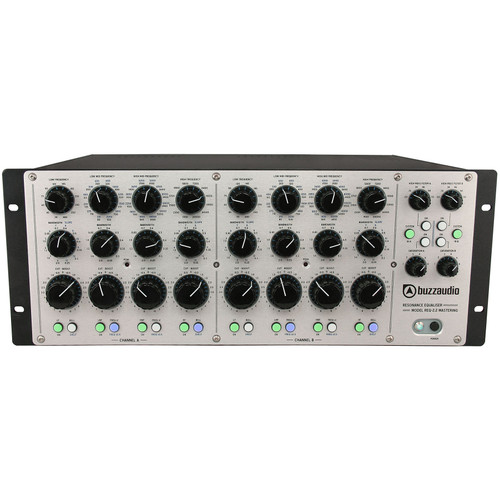 The Buzz Audio REQ-2.2MEA Equalizer is a mastering version of the REQ-2.2ME but features an active filter low band.  Additionally, this unit come with custom Lundahl LL1684 Transformers - a $350 upgrade value for no additional cost!

The Buzz Audio REQ-2.2 Equalizer utilizes parallel resonant circuits in a clever configuration whereby the bandwidth (Q) of the circuit can be adjusted like an active filter, but without any complex relay switching. The inductor/capacitor resonant tank eq circuit runs at a low internal signal level which avoids any inductor saturation effects. The overall result is the sound of real choke based filters with a big open sound, but without the limitation of only a few - or no bandwidth selections as found on traditional choke eq's.

As you would expect, the REQ uses their BE40 True Class A circuits developed for the MA-2.2 microphone amplifier for superlative audio performance. It also utlilizes their BE44 discrete line driver at the output that acts like a transformer and can respond to balanced or unbalanced loads. But, sometimes you might need a bit more color, so Buzz Audio have included a saturation section that introduces measured amounts of low frequency harmonic distortion via a steel audio transformer driven by a single ended tansistor amplifier. The High Pass Filter is placed in the beginning of the eq chain and the Low Band eq section is placed last in the chain. This layout produces the best overall equalizer coherency.