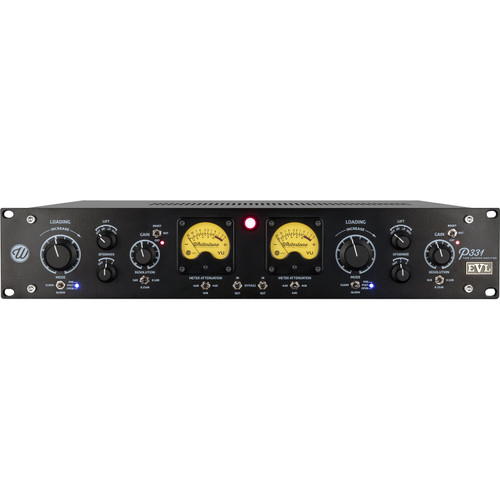 Both the Whitestone Audio P331 Tube Loading Amplifier and its “EVL twin” were developed to bring professional tracking, mix and mastering engineers versatile, elegant, precise and repeatable audio circuit variation. These are high-fidelity, hybrid vacuum tube /solid-state audio enhancement devices. They’re identical in their signal flow and control circuits, however we designed the P331-EVL to be more direct…more forward…less “polite” in its presentation.

SO WHAT RE THE DIFFERENCES?
Well let’s start with what’s the same. Like the original P331, the EVL version utilizes digitally controlled analog for all controls. Left/Right coherence is every bit as precise. The fully-differential solid-state output amplifier is unchanged. The LIFT circuit is also identical in both units, however, since the lifted frequencies are affected by the harmonics generated by the LOADING section…LIFT on the EVL will not sound exactly the same as the original P331. The fully-differential tube LOADING amplifier in the EVL starts from a much different point. While the LOADING control is functionally the same as the original P331 in that it controls the 6SN7 tube’s operating point, it’s being pushed much harder from the start. It’s not like a distorted guitar amp…it’s still “mastering appropriate”. It’s simply a different, more forward “feel” than the original P331. The XFORMER section is where the most differentiation occurs. We’re driving WAY more current at the EVL transformers …forcing them much further into saturation. The result is a more pronounced low-end presence, thrust and punch without becoming stuffy or losing clarity.

SOUL
The introduction of RCA Radiotron's 6SN7 octal (8-pin) double triode tube to the American market, was the birth of the true common ancestor of all modern double triodes used in high fidelity amplifiers. With good reason, the 6SN7 is still in production after over 80 years. 6SN7 vacuum tubes of the 1940s vintage were chosen for this amplifier due to their lower distortion capabilities that exceed that of the standard and ubiquitous 12A*7 variety. The 12A*7 varieties were incarnated due to commercial needs such that they were “better, cheaper, lighter” at the expense of embodying more distortion. With the advent of feedback, tube amplifiers could be mass produced with these less expensive 12A*7 style tubes using more feedback to reduce distortion. While feedback reduces distortion, it also lowers overall amplifier gain. It might have been considered heresy to reduce the gain through feedback (and reduce distortion) in earlier tube designs since minimal gain was still extremely expensive prior to the 1950s. Thusly, earlier tube designs were lower distortion on purpose; especially for their critical role in modulation based communication systems that had more stringent requirements than the average 1950s guitar amplifier tube. Notwithstanding, ultimate circuit topology can bring out more second harmonic characteristics than usual with any tube design. Hence the impetus for the variable circuit topologies within the P331 Tube Loading Amplifier to allow the user to do so as necessary or not at all.

HEART
Good clean power is the very foundation for any truly great amplifier. The P331’s linear power supply is the most critical “component” for audio integrity next to the actual gain structure and circuit topologies within this amplifier. High voltage plate/anode tube power supplies start at around 320V DC and are filtered (up to 6 times) and smoothed with active regulators. It only uses film capacitors and real inductors (chokes) to remove ripple and noise from the high voltage power supplies.

BRAINS
The Whitestone audio P331 is full digitally controlled analog- thus taking the very best of vintage analog technology, and married it to the best of modern computer optimized circuit design. This allows a level of precision and clarity which was simply unimaginable when tubes of this vintage were originally developed. Each parameter is fully repeatable and can be recalled via front panel rotary and toggle switches commanding over 80 sealed precision relays. No audio runs to the P331’s front panel and only the finest components are used throughout the audio path.