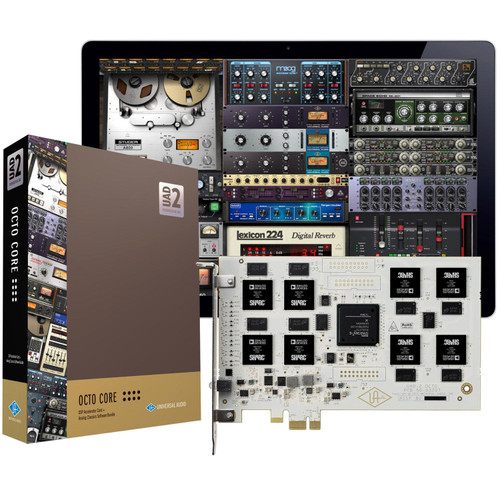 These popular UAD plug-in packages feature a user-installable DSP Accelerator Card for your desktop tower or PCIe expansion chassis, plus a choice of software bundles to give you vintage tone and character, right out of the box.

UAD: The Industry’s Most Respected Collection of Audio Plug-Ins
From serious home recordists to multi-platinum mix engineers, UAD Powered Plug-Ins have been winning over audio professionals for more than 10 years. The reason is simple. No other plug-ins so faithfully capture the sound and behavior of classic analog equipment — from rare compressors and equalizers, to vintage reverb processors and tape machines. The UAD library features over 90 plug-ins, co-developed with the biggest brands in audio. These plug-ins can be purchased with UAD-2 hardware from retailers as part of bundled packages, or you can buy UAD plug-ins à la carte from UA’s Online Store.

Available with QUAD and OCTO Core Power
UAD-2 DSP Accelerator cards are available in QUAD and OCTO configurations, with four or eight individual SHARC processors respectively. The four-processor UAD-2 QUAD is a workhorse of modern mixing, giving project studios the power to run medium-sized sessions. The eight-chip UAD-2 OCTO is perfect for UAD power users, allowing professionals to craft mixes filled with the rich analog sound of UAD plug-ins. Up to six UAD-2 devices can be combined in a single system.

Select from Core, Custom, and Ultimate 7 Software Packages
UAD-2 Core packages include the Analog Classics Plus plug-in bundle, while Custom packages include the Analog Classics Plus bundle, plus a choice of any three individual UAD plug-ins at registration. The Ultimate 7 is UA’s flagship package, and includes all 99 UA-developed plug-ins up to and including UAD software 9.7.