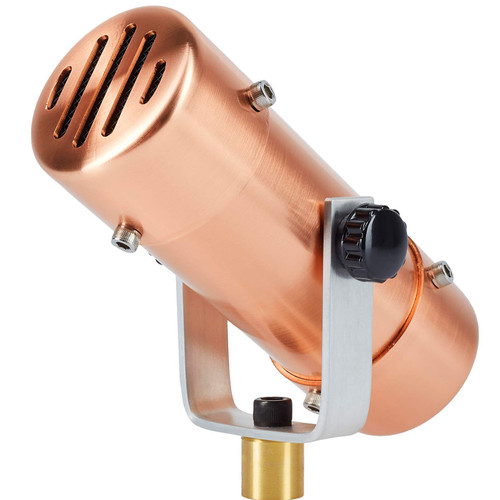 The Placid Audio Resonator A Microphone unlike full range high fidelity microphones, operates within a limited bandwidth of frequencies which lends a compelling resonant, music box like quality to the signal. Some might compare the sound to an old Victrola or gramophone.

The sound is achieved through a combination of the microphone's element and a mechanical filtering device. The element is specially loaded into a resonant baffled chamber and as sound passes through the chamber, upper mid range frequencies are accentuated while low and high frequencies are reduced. The Placid Audio Resonator A does not use phantom power as it has a passive dynamic element. It uses a Switchcraft 3 pin male XLR connector and can be connected to any audio gear with a 3 pin female XLR connector via an XLR cable. Accidentally applying phantom power will not harm the microphone or affect its performance. Because the sound of Resonator A has a character unlike many other traditional mics, it makes a great addition to any recording enthusiast's arsenal of microphones. It can be used as an all out obvious effect' on it's own or it can be paired with other traditional microphones for infinite blending possibilities.