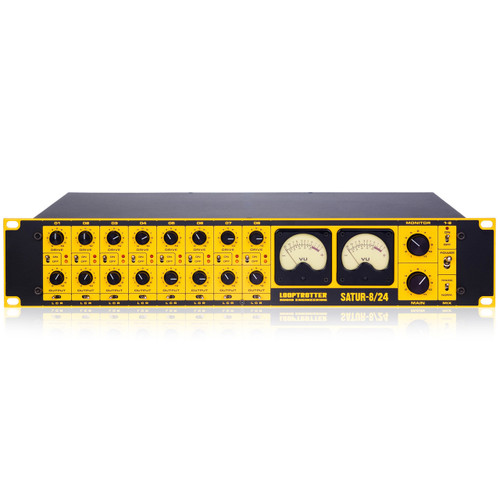 The Looptrotter Satur-8/24 Summing Mixer is a unique Discrete Class A, 24 channel summing mixer with 8 channels of analog, solid state saturation modules. The design refers to the sound of old tube mixing consoles and tape recorders from the 1960’s.

The Looptrotter Satur-8/24 Summing Mixer can be used as 8 independent saturation modules, applied either during recording or mixing. SATUR-8/24 is also a 24-channel summing unit. Thanks to the independent control of the main output and monitoring, it can be utilized as a monitor controller in your studio.The saturation modules resemble the sound of old tube mixing consoles and tape recorders. However they are built entirely with the use of semiconductor technology, which guarantees endurance and reliability.The summing module is an original combination of active summing, run by operational amplifiers and passive summing based on transformers. The mixed signal is amplified by a transistor preaplifier operating in pure class A, built of discrete elements, inspired by the early designs of transistor preamps from the 60's. Additionally the summing circuit is fitted with a “Magic” module, which magically nears, widens and thickens the whole mix, giving it a vivid, analog sound.

CONNECTIONS
The Looptrotter Satur 8/24 utilizes balanced XLR connections for Monitor and Main Output, balanced TRS for Insert input and Output and DB25 for the channel input/output. The unit may not only be used as a summing mixer but also as a 8 channel saturator for processing stems, track groups or the whole mix, thanks to direct output from 1-8 saturation modules.