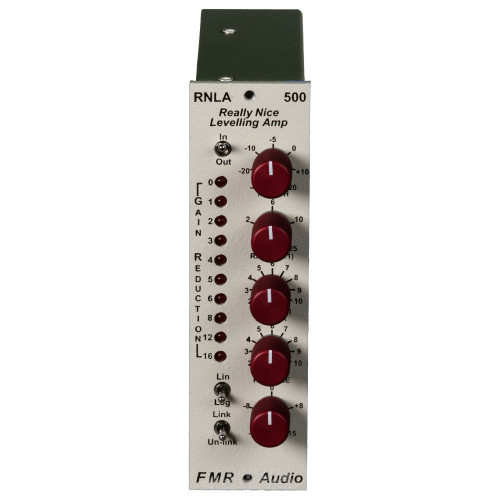 The FMR Audio RNLA 500-Series "Really Nice" Levelling Amplifier is based upon the successful RNLA, and not only fits the increasingly popular 500-Series rack, but delivers an improved thick and gooey character befitting the format!

It's tempting, if not a little lazy, to view the new 500-series offerings as mere repackages of FMR Audio's tried-and-true products like the RNLA. There is really nothing mere about them. It's not that there aren't obvious connections...the RNLA500's lineage is definitely visible and audible: RED knobsalbeit slightly more (ahem!) refinedprovide a visual clue as to its origins while it's THICK & GOOEY sound tell you the RNLA's algorithm is still beating in its silicon heart (brain?)! Okay, it's still an RNLA that you can use to add some compression-induced character (and control) to your vocal/bass/drum/mix/guitar/piano/orchestral/banjo tracks. It's also comfortably responsive to its controls, just like our 1/3 rack version. So what about this isn't merely a repackaging?

First, there's the 500-series thing: small, rugged and convenient analog audio processing modules that fit into just about any recording situationfrom pro studios to bedroom venues. Having what you need, when and where you need it is, as "they" say, half the battle. The 500-series format is, well, everywhere. Secondly, although convenience and size are important (this is audio after all), if it doesn't deliver the sonic results, what's the point? Even our dyed-in-the-wool RNLA users notice that there's something more here: THICK & GOOEY, meet CREAMY & SMOOTH! From fully, electronically balanced I/O to higher-resolution arithmetic, the net result is a professional audio compressor that's both responsive, small, rugged and has tone for days! RNLA progeny? Yes. But not merely...

How It Sounds
Okay, THICK, GOOEY, CREAMY & SMOOTH. Got it. For most of us, this means that it sounds good, but what does that mean? The RNLA500 is, admittedly, much "gentler" and not as apt to grab'n'run with the signal as other, more "modern-sounding" compressors. Like an old-timey photocell, the RNLA500 is a little resistant to responding right away, but requires the signal to be there for a while to get the photocell to act. That slight hesitancy to respond is one of the key performance parameters that causes opto (and opto-like) compressors to be so coveted. Althought the RNLA500 is a VCA-based compressor, our algorithm controls it in a manner that puts the essence of opto-compressors in a more modern and controllable compressor.

How It's Done
Like all of our dynamic audio processing products, we've replaced sidechain electronics with chunks of software to accomplish both a bill-of-materials cost reduction while simultaneously improving dynamic performance accuracy and consistency. The beauty of this approach is that the main signal path (all dynamic audio processors have two paths: a sidechain/control path and the main audio path) remains firmly in the analog domain thereby avoiding latency and digital conversion artifacts that are sometimes unwanted. Coupled with a faster (40x) processor and higher-resolution VCA control, sealed switches & relays, multi-layer printed circuit board (PCB) the RNLA500 will deliver smooth and controllable compression for years to come.