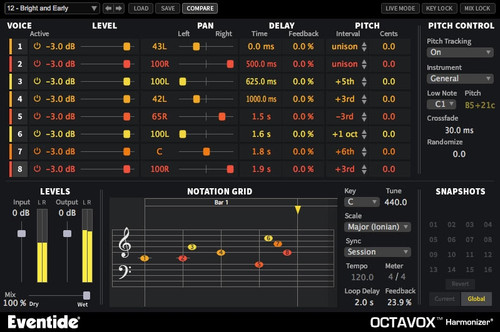 The Eventide Octavox Plug-In is a powerful audio engineering plug-in for Avid AAX, Apple Audio Units, and Steinberg VST formats. Eight voices of pitch-shifting and delay are combined in the Notation Grid to let you create simple harmonies or complex rhythmic sequences. The Octavox brings you Eventide's time-based diatonic harmonizer technology presented in an easy to use and unique interface.

The Eventide Octavox Plug-In offers you level up your composition skills with Octavox's unique time-based diatonic harmonizer technology. The Eventide Octavox is an inspiring tool that takes any incoming toneseven drumsand outputs up to eight voices based on the chosen key and timing interval. Based on technology from Eventide's flagship H8000 hardware effects processor, the Eventide Octavox will take your melodies and ideas to new heights. Stack harmonies, widen instruments and create innovative rhythmic sequences. Whether you are an electronic musician, singer/songwriter or guitarist, the Eventide Octavox has got you covered with more than 70 presets to boost your creativity and productivity.

The Eventide Octavox controls have been designed in the most intuitive way, allowing you to quickly adjust parameters or type in values. Each of the eight voices can be independently manipulated by level, panning, delay time with feedback, and pitch, including the type of musical interval. The effect can even be sync'd to your DAW tempo for killer, melodic, rhythmic delays. The Eventide Octavox has also been updated with expanded MIDI functionality. Each voice interval can be set via MIDI note, voice shift amount by MIDI Pitch Bend, and Randomize by MIDI Modulation Wheel.