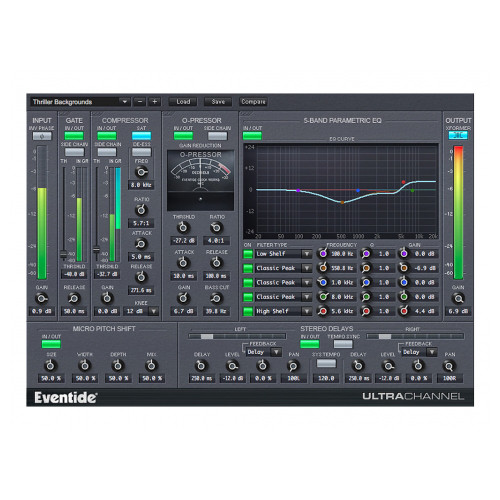 The Eventide UltraChannel Plug-In is a high-precision channel strip that includes several feature-packed versions of Eventide's legendary effects, all in one plug-in. Whether mixing or mastering, regardless of genre, the Eventide UltraChannel Plug-In is the ultimate tool to make your tracks and mixes come to life. It not only has industry benchmark performance, but is also the most versatile channel strip available due to Eventide's exclusive FlexiPath routing, which allows processors to be ordered based on desired workflow.

The Secret Sauce of Mixing

The Eventide UltraChannel shines in carving out space for any instrument or vocal to sit just right in the mix. There are an infinite number of ways to generate the exact tone, dynamics and frequency characteristics you're seeking. Additionally, through its support for side-chaining, you can use an alternative audio source to color the characteristics of your main signal. It wouldn't be an Eventide if it didn't also feature micro pitch functionality (from Eventide's flagship H8000 hardware) to thicken or increase the stereo spread of any instrument or vocal.