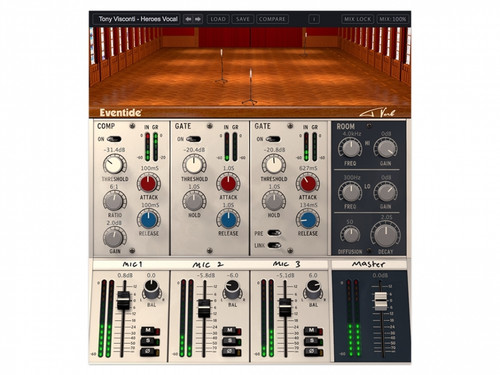 The Eventide Tverb Reverb Plug-In integrates 3 completely independent lush reverbs with compression and selectable polar patterns on microphone 1 and adjustable gates on microphones 2 and 3. With an intuitive interface, the Tverb recreates 3 vocal channels together - a close mic offers clean or compressed signal while two gated mics can be moved anywhere in the virtual room for customizable gated reverb.

The Eventide Tverb Reverb Plug-In is inspired by the legendary Heroes session at Hansa Tonstudio in 1977 Berlin, and is eveloped with the encouragement and support of Tony Visconti. The historic Meistersaal concert hall, built in 1910, was Hansa's studio 2. It's a large room designed for classical music concerts. Mr. Visconti, impressed by the acoustics of the room, had an idea. Why not utilize the hall's acoustics to augment Bowie's vocal? From his many years of collaboration with David, Tony knew both the power of that voice and Bowie's willingness to explore new sonic vistas. The result is the iconic Eventide Tverb Reverb Plug-In!

A Room of Your Own

Developed with legendary producer, musician, and engineer Tony Visconti, the Eventide Tverb Reverb Plug-In provides an extremely customizable room reverb with some unique techniques and features. Within this virtual room (modeled on the legendary Meistersaal at Berlin's Hansa Tonstudios) you can mix three virtual channels: one main mic with subtle ambience and two moveable mics capturing the lush room reverb.

The Eventide Tverb Reverb Plug-In is a reverb unlike any other. Start with a perfect room and configure it to taste by adjusting the standard reverb controls of decay, diffusion and EQ to create the ambience that brings your tracks to life. Now, place a couple of additional microphones anywhere in that room. Move them around until the track sits perfectly in your mix. Set the mikes' gates to open with the dynamics of the track. The Eventide Tverb gives you control all of these parameters and more. And because the Eventide Tverb is algorithmic, you can do it all in real time (which wouldn't be possible with a convolution reverb). You can even have your mics dance around the room in real-time. Impossible in real life; a snap in Eventide Tverb.

With analog-modeled compression on the main channel and gating on the reverb channels, the Eventide Tverb is a unique tool for audio with wide dynamic range. The inspiration for the plug-in was the setup Visconti used to capture the incredible dynamic range of David Bowie's vocals while recording Heroes. The Eventide Tverb builds on Visconti's technique and opens up undreamed of possibilities.