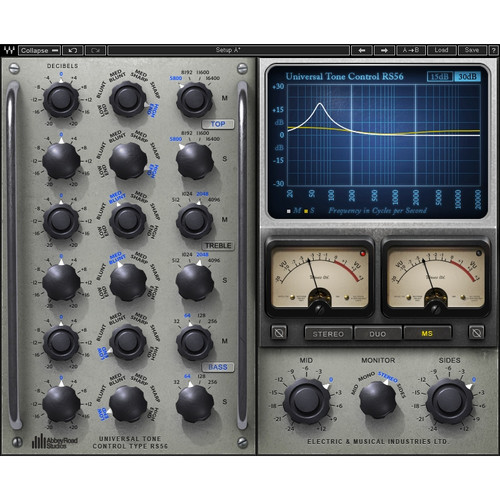 Product Code: 9999-14916
WANT A BETTER PRICE?!
Waves is always changing prices and offering specials, we just can't keep up. So, before you order, contact us and we will get you the very best deal possible on all your Waves plug-ins, bundles, and upgrades!
Get A Quote
$249.00

Waves RS56 Passive Equalizer Plug-In is passive equalizer with powerful sound-shaping capabilities, the RS56 Universal Tone Control was originally introduced in the early 1950s and used in Abbey Road Studios to prepare recordings for the record-lathe, as part of the process we now know as "mastering."

Waves RS56 Passive Equalizer Plug-In is a software recreation of the classic and rare RS56 EQ. A passive equalizer with powerful sound-shaping capabilities, the RS56 Universal Tone Control was originally introduced in the early 1950s and used in Abbey Road Studios to prepare recordings for the record-lathe, as part of the process we now know as "?mastering." Later, Abbey Road"?s pop engineers began using the RS56 for studio recordings because of its abilities to dramatically manipulate sound "" unlike the basic treble and bass EQs found on the mixing consoles of the time. This earned it the nickname "?The Curve Bender."

Waves and Abbey Road Studios have faithfully recreated the unique magic of the RS56, using advanced circuit modeling techniques based on the original schematics. Like its hardware predecessor, the Waves: Abbey Road RS56 passive EQ plugin features three bands with four selectable center frequencies for each and six different filter types, plus independent or linked control over the left and right channels. The result is an extraordinary equalizer that is as effective today as it was when it was created over half a century ago.

The RS56 is a passive EQ, meaning no amplification of any kind is used to create its filters. In fact, it can"?t even be plugged into a power socket. Passive EQs use high value capacitors and inductors to achieve the desired filtering. This lack of amplification means passive equalizers can only attenuate the signal, not boost it. Therefore, boost-like frequency-shaping is achieved by attenuating the entire signal except the specified frequency. For example, to achieve a 6 dB "?boost" at 1 kHz, a passive EQ attenuates the entire signal by 6 dB apart from 1 kHz. The entire input signal is attenuated by the sum total amount of possible boost; in the case of the RS56 hardware, with three bands that can boost up to 10 dB each, the overall signal attenuation is 30 dB. In most cases, make-up gain is applied post-processing to bring the signal back up; at Abbey Road Studios, make-up gain was applied using V72 amplifiers, as found in the REDD.17 and REDD.37 consoles.

Created in the early 1950s by EMI engineer Mike Batchelor, the monophonic Universal Tone Control Type RS56 was the most flexible equalizer of its time, and an influence on EQ designs for years to come. Later, the stereo RS56-S was introduced, which offered independent linkable controls for left and right channels. The RS56 is one of those rare, mythical pieces of equipment that only the most hardcore gear aficionados even know about. The original RS56 featured three bands (Bass, Treble and Top) with four selectable center frequencies for each and six different filter types, providing +/- 10 dB of cut/boost in 2 dB increments; the Waves: Abbey Road RS56 plugin offers +/- 20 dB of cut/boost, in 0.1 dB increments. The RS56 is an extremely musical-sounding EQ; the center frequencies of its Bass and Treble bands are exactly one octave apart and, in the Top range, half an octave apart.

The RS56 was used in Abbey Road Studios from 1951-1970 to put the finishing touches on recordings prior to disc-cutting. However, due to the RS56"?s ability to dramatically transform the sound of input source material (as well as EMI"?s dedication to "?True Fidelity"), its studio use was initially restricted to fixing externally-recorded materials; the RS56 was deemed unnecessary for recordings made at Abbey Road. However, as time went on and experimentation in the recording studio became more acceptable, the Beatles"? engineers were the first to be granted permission to use the RS56 for recording and mixing.