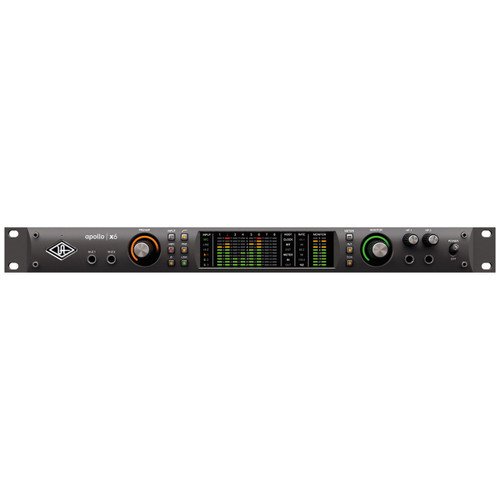 Elite-Class A/D and D/A Conversion
With thousands of chart-topping songs and hundreds of Grammy-winning albums under their belt, Apollo interfaces are no strangers to tracking stellar-sounding records. To improve on the previous generation Apollo interface’s class-leading audio conversion, UA engineers obsessively auditioned the latest A/D and D/A converters — ultimately pairing elite-class 24-bit/192kHz converters with all-new analog circuitry for an ultrapristine signal path. With 129dB dynamic range and -118dB TD+N, Apollo x6’s open, natural sound quality rivals any dedicated high-end converter on the market — regardless of price — and is the perfect starting point for applying UAD processing.

Realtime UAD HEXA Core Processing
Apollo x6 features new HEXA Core processing, with six DSP chips and 50% more UAD plug-in processing power than previous Apollos. This lets you run more UAD plug-ins, whether you’re tracking in real time with channel strips from Neve, Manley, or API, or running high UAD plug-in counts when mixing in your DAW. From the tube warmth of Pultec EQs on guitars to the musical tube limiting of the LA-2A on vocals, or the pump of a genuine 1176 or Fairchild 670 tube compressor on drums, your recordings will take a giant leap forward with a rich, three-dimensional analog sound that UAD plug-ins provide.

A Full Suite of Classic Analog Processing Onboard
Of course, a hallmark feature of Apollo is its Realtime UAD Processing, letting you run the full library of UAD plug-ins with near-zero latency. Apollo x6 includes the Realtime Analog Classics Plus plug-in bundle, so you can record and mix with the world’s only authentic Teletronix LA-2A, 1176LN, and Fairchild compressors, Pultec EQs, and many more.

Access the World of UAD Powered Plug-Ins
Going beyond the included Realtime Analog Classics Plus plug-ins, Apollo x6 lets you tap into the full UAD Powered Plug-In library of name-brand vintage EQs, compressors, reverbs, tape machines, channel strips, and more — at near-zero latency, regardless of your audio software’s buffer size and without taxing your computer’s CPU. With exclusive emulations from SSL, Neve, Studer, Manley, API, Ampex, Lexicon, Fender, and more, it’s like having a studio full of iconic analog gear, in a single rack space. And unlike competing interfaces, these award-winning DSP-powered plug-ins are also available in your DAW for mixing.

Surround Sound Monitoring and +24dBu Operation
With comprehensive surround monitoring support for formats up to 5.1, Apollo x6 is a boon for engineers and producers working on audio and music for video games, television, and the web. In addition, Apollo x6 offers selectable +24dBu operation for out-of-the-box compatibility with professional mixing consoles and other high-end pro audio equipment.