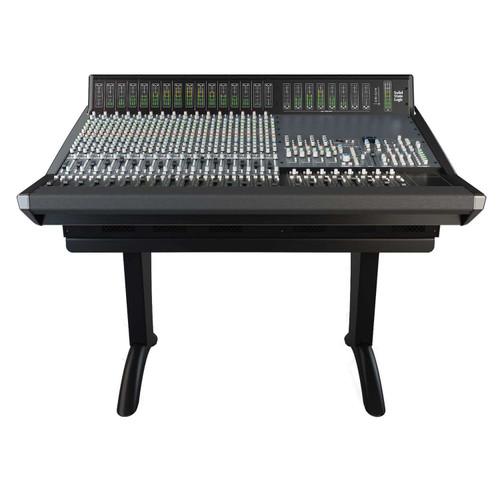 The Solid State Logic Origin 16 Console features intelligent hybrid workflows and stunning sound quality, all in a smaller footprint. Ideal for project studios, music technology schools and colleges, as well as producer rooms or smaller record/mix facilities, the Origin 16 brings the dream of an SSL studio closer to a broader range of users who crave the legendary sound and advanced workflow of SSL.

The Solid State Logic Origin 16 console is the most comprehensive analogue console in its class and the ultimate solution for a hybrid, DAW-based workflows where console automation is not required. Sharing the same centre section as the bigger 32 channel variant, ORIGIN 16 draws on traditional in-line consoles for inspiration, while leveraging SSL's latest cutting-edge analogue design.

Simple signal flow, advanced features
ORIGIN 16's simple signal flow and layout make it easy to understand and use, while powerful features such as channel direct outputs, a fully balanced electronic architecture and precision bargraph meters make it an ideal companion for even the highest quality converters and the most demanding professional production applications. Similar to its larger sibling, an innovative modular centre section allows ORIGIN 16 to adapt to different applications. This 19" rack centre section gives you the control to expand the console to best fit your needs. For instance, a tracking console with additional boutique analogue processing to its 19” rack centre section, or a more digital/analogue hybrid approach with screens and controllers such as the SSL UF8 Advanced DAW Controller — all of which are easily reached from the listening position. ORIGIN 16's ultra-low power consumption and innovative power saving features equal lower operational costs for smaller rooms and musician-based project studios.

Stunning audio performance
ORIGIN 16's PureDrive microphone preamplifier provides a wide range of sonic options, bringing unparalleled flexibility whether using it for tracking or mixing. Users can attain ultra-clean to driven sounds present in previous SSL mic pre designs, but also engage a warmer, more harmonically rich tone by activating the “Drive” function. ORIGIN 16 also uses a classic SSL EQ design made famous on its previous generations of consoles. The E-Series '242' EQ was probably the most popular EQ from the SL 4000 Series console range, and this design was also present in several SSL console designs that followed, including the G-Series. A built-in classic SSL Bus Compressor, with sidechain access and HP filter, make ORIGIN 16 the perfect solution for mixing and summing.