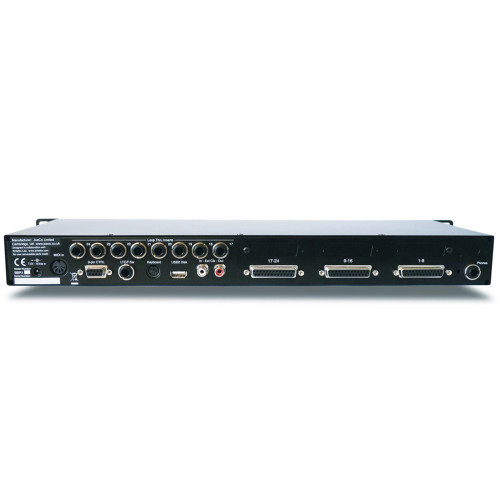 The JoeCo BlackBox BBR1-U 24-Track Recorder is an unbalanced multi-track recorder designed to bring the high quality recordings and failsafe dependability for which the Blackbox Recorder is known to more traditional analogue set-ups.

The JoeCo BlackBox BBR1-U 24-Track Recorder features an unbalanced I/O and is designed to plug across the insert points of a standard analogue mixing console via three 25-way female D-type connectors on the rear of the unit. Three 1/4-inch TRS terminated multicore looms are supplied for connecting the BBR to the console (TASCAM analogue format). Inside the unit, relays route the audio signal from input to output in all modes except during playback. This provides an additional level of safety so that in the event of a power failure on the BBR, the audio through the PA will not be affected.

In this model, eight insert returns are also brought out to TRS jacks on the rear of the unit, allowing additional outboard equipment to be plugged into insert points as required. All JoeCo BlackBox BBR1-U 24-Track Recorders are designed and built to exacting standards with rugged construction and a suite of unique multi-track audio capture features. The choice of professional users, the JoeCo BlackBox BBR1-U multi-track recorder is the solution the professional audio industry chooses and trusts.

"JoeCo BLACKBOX RECORDERS will help keep you from shortening your lifespan due to the extreme toll of the stress associated with live recording. That sounds extreme - doesn't it? Well, it's actually a pretty realistic way to look at it - ESPECIALLY if you have ever tried to multi-track record a show on your own without a limitless budget. Look, I have dealt with lugging a TON of gear out to live venues in order to capture the show in multi-track. Even with some of the best of gear for the studio setting, if it is having to interface with a laptop (even if it is 'audio-optimized', or whatever etc), then chances are you are playing the serious game of 'Reverse-Russian-Roulette' where only ONE chamber is empty. Any number of things can go wrong - and with computers, when it goes wrong... there goes the frickin' show, and all your hard work has been for nothing. And there is nothing worse than having to explain to the band that the computer took a dump during the recording... and THEN having to pack up all that extra gear and lug it out to the car for nothing. If you were hired for the gig, then you lose money and very likely, you'll lose the future work. That in and of itself should make the BlackBox your first priority to acquire for live recordings and archiving. And if none of that is reason enough, then I'll tell you this - Your recordings will come out better with the BlackBox because you can FOCUS on the job of getting your microphones placed properly and your levels set to handle unexpected peaks, etc. Otherwise, you're running around like crazy doing that job AND trying to troubleshoot why your driver isn't initializing for whatever reason. "With all of the available I/O configurations available, there is a JoeCo BLACKBOX to meet your needs. Give us a call and we can help you configure the system that is right for your needs."