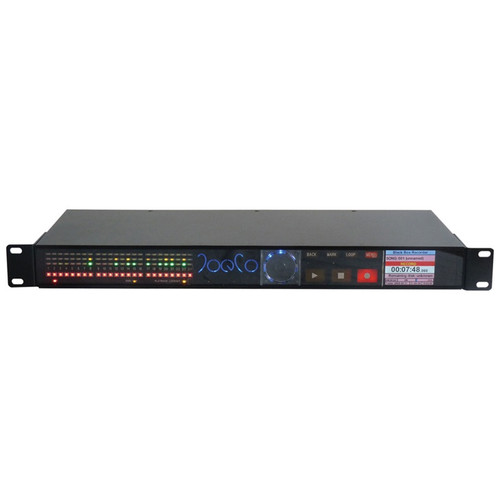 The JoeCo BlackBox BBR1-D 24-Track Recorder is developed to solve the inherent problems of working with computer-based systems in a live environment. It is the trusted choice of professionals using a digital mixing console with AES/EBU I/O. Three 25-way female D-type connectors, each carrying 8 channels of inputs and outputs, can be connected directly into the digital mixer to capture and return the signals without any additional A-D conversion, giving 12 stereo channels of AES/EBU inputs and 12 stereo channels of AES/EBU outputs. Analogue inputs are also still available (switchable). All other Blackbox Recorder features remain unchanged. The AES/EBU interfaces can operate at up to 96kHz and conform to the AES standard (AES-3:2003). It is also possible to daisy-chain multiple JoeCo BlackBox BBR1-D 24-Track Recorder units together to create a larger system.

"JoeCo BLACKBOX RECORDERS will help keep you from shortening your lifespan due to the extreme toll of the stress associated with live recording. That sounds extreme - doesn't it? Well, it's actually a pretty realistic way to look at it - ESPECIALLY if you have ever tried to multi-track record a show on your own without a limitless budget. Look, I have dealt with lugging a TON of gear out to live venues in order to capture the show in multi-track. Even with some of the best of gear for the studio setting, if it is having to interface with a laptop (even if it is 'audio-optimized', or whatever etc), then chances are you are playing the serious game of 'Reverse-Russian-Roulette' where only ONE chamber is empty. Any number of things can go wrong - and with computers, when it goes wrong... there goes the frickin' show, and all your hard work has been for nothing. And there is nothing worse than having to explain to the band that the computer took a dump during the recording... and THEN having to pack up all that extra gear and lug it out to the car for nothing. If you were hired for the gig, then you lose money and very likely, you'll lose the future work. That in and of itself should make the BlackBox your first priority to acquire for live recordings and archiving. "And if none of that is reason enough, then I'll tell you this - Your recordings will come out better with the BlackBox because you can FOCUS on the job of getting your microphones placed properly and your levels set to handle unexpected peaks, etc. Otherwise, you're running around like crazy doing that job AND trying to troubleshoot why your driver isn't initializing for whatever reason. "With all of the available I/O configurations available, there is a JoeCo BLACKBOX to meet your needs. Give us a call and we can help you configure the system that is right for your needs."