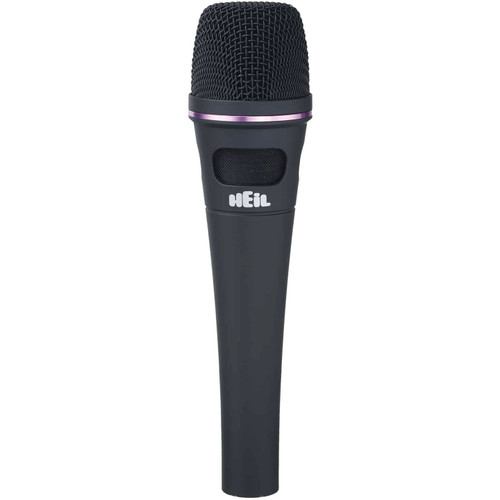 The Heil PR-35 Handheld Dynamic Microphone is an incredibly versatile vocal microphone. It has an amazing amount of rear rejection but exhibits no off-axis coloration, so it is like having a supercardioid and omni mic in one!

It works well for commercial broadcast, recording, and live sound reinforcement applications. When you need a smooth, flat response over a wide frequency range the Heil PR-35S is your mic. The Heil PR-35 was designed around the acclaimed Heil PR-30 element and incorporates a sorbothane shock mount to give you the best possible results.

The Heil PR-35 achieves its exceptional performance by using a special magnet structure and a large aluminum 1-1/2" low-mass voice coil assembly. A carefully wound and placed hum bucking coil allows the Heil PR 35 to be placed near video monitors without unwanted hum or buzz. Special attention has been paid to the phasing plug assembly with equally placed ports that sense audio from behind the source. It then enters them out of phase, thus producing a very linear cardioid pattern. This reduces the proximity effect while achieving the extreme articulation across its smooth 40 Hz - 18 kHz frequency response. The Heil element can be used in extreme high sound pressure levels and is immune to overload conditions. It produces a beautifully smooth audio response without the inconvenience of phantom or outside DC powering.

The Heil PR-35 is a veritable 'Howitzer' of vocal microphones. I recently purchased one for myself (and have now recently purchased two more) for use with a particular performer. I was initially attracted to it by the fact that it is a re-purposed PR-30 which I feel is one of the best sounding all around dynamic microphones available to my ear. The other vocals onstage were handled by the "industry standard" and when we did our sound-check, it was like comparing toddler-tricylcles with a Harley Davidson Fat Boy. The PR-35 exhibited a flattering clarity, body, and presence that was larger than life - and it has a TON of output. The said performer immediately said, 'This is the best my voice has ever sounded on-stage.' Mixing the show suddenly became an easier task since the lead vocals sat in the mix very well.

The mic does tend to have a ton of low end. However, you can shape the lows with the 3-position roll off (flat, -3dB, and -6dB). However, if you are using a digital console, you'll benefit from your built-in continuously-variable high-pass filter over the PR35's 3-position switch, as the lows tend to take a quick dive But the interesting thing to note is that even with the mic set to flat and in use on a stage that is prone to letting the low-end run away in feedback, the PR-35 resisted ever catching a low-frequency feedback loop. This is a testament to the background rejection of this mic.I'm often concerned with what an open-mic is doing to the mix when nobody is singing. So, I would solo up the mic via the PFL during instrumental passages and it was apparent that ambient soures are more focused and much less "warbly" than what I'm used to encountering. In fact, what spill came into the mic was something that was very musical and complimentary to the drier elements.

My only complaint regarding the overall package of the PR35 is how the supplied mic-clip interacts with the rubberized coating. The coating feels really good when using the mic as a hand-held. However, the rubber is not very "sticky" when combined with the mount and is therefore a bit too slick for the mic to maintain staying-power on the stand - especially if the performer wants to angle the mic more for aesthetics than for practical feedback rejection; the mic may very well slip forward and out of the mount. It looks like Heil tried to tackle this problem with the addition of some "fins" at the bottom interior of the mount. The fins may have worked to reduce the problem. However, I feel that I should be able to hold the mic by the clip pointed downward and that the mic would not budge if jiggled about. However, the PR-35 begins to slip in relatively short order. And the PR-35 is a larger microphone than most - which is why the clips supplied are the same as what you'll find that ship with Shure handheld wireless mics; which is handy should you need a replacement clip. Still, this is a minor problem to overcome when considering the performance of the microphone itself. Afterall, we are discussing a mic-clip here.

In the end, one is hard-pressed to find a better vocal dynamic vocal microphone. However, since every voice is different, it may not be mic for a particular voice - which is a truth to be said of any vocal microphone. There are some really nice hand-held vocal condenser mics on the market, but the risk for feedback is much greater with little, if any, benefit to the sound over the PR-35. Where most of us are not mixing on major touring stages that have enough real estate to help diminish the spill of other elements into the vocal, the condenser mic alternatives are not a realistic alternative to those of us working on "real" stages when taking the widely varying degrees of microphone technique and stage volumes and so forth. In the PR-35, Bob Heil has taken our familiar friend, the dynamic microphone, and has given us the best of both worlds.