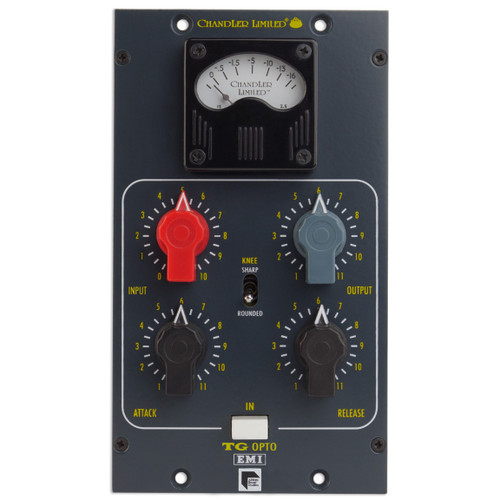 The TG Opto for 500 Series is a relative of the TG1 Opto, found in Chandler Limited's TG Microphone Cassette, the TG1 Limiter and Zener Limiter, and traces its lineage to the historic EMI TG12413 limiters found on the TG12345 mixing and mastering consoles of the late 60s and early 70s. EMI's transistor based TG12345 recording consoles helped shape the sound of the Beatles final album, Abbey Road, which was notably richer sounding than the band's earlier work, and Pink Floyd's Dark Side of The Moon.

The TG Opto compressor control-set includes: selectable sharp and rounded knees, continuous input, output (makeup gain), attack, release, and true bypass. The attitude of the TG Opto is one of two personalities, each actuated by the selectable sharp and rounded knee types. In sharp, the TG Opto is capable of explosive drum sounds, and set to rounded, it's easily suited to scenarios where compression is required to be less obvious. The continuous control-set affords the ability to fine-tune compression to respond to an array of sources and create a variety of tones.