Vanguard Audio Labs may be a new comer, as far as the company itself goes, but make no mistake about it - the team behind Vanguard have long standing involvement in the industry. Vanguard touts a combined experience of over a century in the audio industry. Their CEO (Derek Bargaehr) spent time as Directory of Operations for a successful mic company, is a freelance engineer, producer, tech, and bassist. Their sales director (Marty Druckman) is no stranger in the industry, having worked with (and still working with) many high end audio manufacturers, he is also a songwriter who's music has been covered by Atlantic Record Artists – and he and his studio team has won two Grammy Awards! Their mysterious chief designer (who likes to work behind the scenes) is as Vanguard puts it: “A grizzled veteran of audio equipment and design, who has created gear used by top engineers and best-selling artists worldwide”. And last, but certainly not least (you always save the best for last) – the greatly loved and sorely missed Mr. Glenn Heffner. Glenn is well known in the audio industry. With decades under his belt - he has worked with so many, it is hard to count. His decades of dedication to the audio industry, along with his friendly demeanor, earned him great respect – and countless friends. Glenn held a great passion for audio (as well as a kindness for everyone), and was a key player in building the foundation of Vanguard.

Vanguard first came to the scene with their offering, the Vanguard Audio Labs V13. The V13 is a tube mic, that features the classic 9 polar pattern design, a -10dB pad, and 125Hz high pass – all wrapped up in looks akin to a beautiful 1950s Chevy. The V13 provides a perfect blend between a robust vintage tone, and modern details. The rich smooth character of the V13 makes it a stellar microphone for both male and female vocals, acoustic instruments, guitar cab, and drums. Giving you the depth and range of the source, without losing the nuances - all with a silky vibe.

Expanding on their line of microphones, Vanguard has announced two new offerings. First is the new Vanguard Audio Labs V44S. As Vanguard puts it: “The Vanguard V44S is a stereo large-diaphragm multi-pattern FET condenser microphone. Lovingly crafted by experts over 2 years, it is designed to be a versatile, reliable, professional tool in the vein of highly-sought-after vintage stereo condensers of yesteryear. With a pair of coincident twin custom-voiced multi-pattern capsules, you can utilitize X/Y, Mid-Side, Blumlein, and other less conventional stereo microphone techniques in a single microphone. With an all-new detented heavy-duty rotation mechanism, versatile splitter box, premium cryogenically-treated FET circuitry, and a VLSM shockmount, the V44S is the first and last stereo microphone you’ll ever need to reach for“. The V44S is expected to start shipping in June 2017 but you an always get a pre-order in with Front End Auido today!

The second new mic that Vanguard has announced is the Vanguard Audio Labs V1 Pencil Microphone Kit. With an interchangeable capsule design, the V1 is sure to be a versatile tool for musicians and engineers. Vanguard state the V1 as: “Lovingly crafted by experts over several years, the V1 is designed to be a versatile, reliable, professional tool for any recording engineer, studio, producer, or artist. 4 total custom-voiced capsules – in both small- and large-diaphragm formats, and with multiple pickup patterns – allow for a cornucopia of tonal variations for virtually any sound source or recording situation. With a “straight-wire” circuit design, premium cryogenically-treated FET componentry, an unparalleled selection of capsules, and a heavy-duty VSSM shockmount, the V1 will be your new studio workhorse.“ The V1 is expected to start shipping in June 2017 but you an always get a pre-order in with Front End Auido today!

This is just the beginning of Vanguard Audio Labs, and the V13 not only set the tone of their goals – but set a high standard for them to maintain. With the upcoming offering, and what else may be on the horizon, the future is looking quite bright for this new vision – from industry vets. 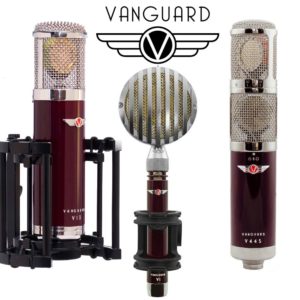