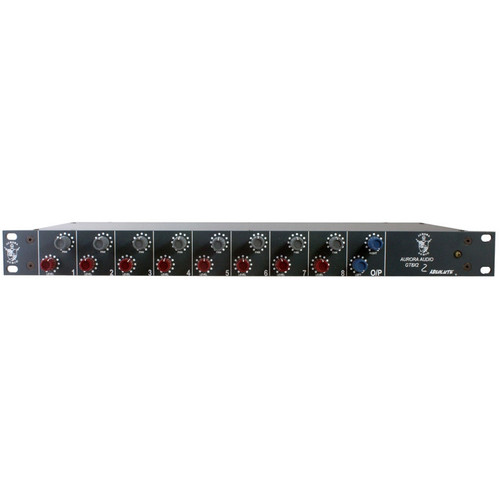 This item is currently on an extended backorder with the manufacturer. Due to limited supply, we do not know when we will have more. If you want one, then we highly recommend that you place your order now to get in line for the next one available. We will keep you updated as we are provided information from the manufacturer. If you have a deadline then please contact us before placing the order so we can meet your expectations.

The Aurora Audio GT8-2 Absolute Sub-Mixer is not only a part of the Aurora Audio expandable console, but a key unit in making your tracking and mixing sessions as professional as they can be.

Show me a truly professional recording engineer, and we will show you a person that will never be solely reliant on digital plugins and doing things totally in the box. There are some pieces of gear that just cannot be duplicated and many of these special units are still in use all over the world by producers, engineers, and artists.

When Geoff Tanner was designing the GTM822-2GN, he knew to fit the users needs, that it had to be expandable and modular. While it is obvious that adding more channels is one way to go, Geoff knew that it was not the only answer. Sometimes the user needs more line in returns for sounds that are not part of the multitrack master to make the most of their mix.

The Aurora Audio GT8x2 Absolute is an 8 input, 2 output unit that enables the engineer to route line level signal where they need to, without sacrificing channels from the mixer. Each channel on the 8x2 Absolute has it's own level control and pan, so you can determine the level and position in the stereo field.

What does that really mean? It means that you get even more control of your sounds. In the context of the GTM822-2GN, the user can expand their effects returns with ease. When used with the Aurora Audio 8x8 Absolute, suddenly the engineer has a powerful, linkable, and expandable line level bussing matrix. This way you can buss your signal around the GTM822-2GN console, creating more fx sends, returns, cue sends, and even the ability to get into more modern mixing techniques like parallel compression. Even with the smallest 8 channel Aurora mixing setup, you can make your mix sound like you were working on a console multiple times its size.

On its own, the GT8x2 Absolute can be used to: blend multiple mic signals to 2 mono outputs or 1 stereo output, a simple summing amplifier to make a mix, and even live applications where output is connected to a PA system!

Now for the important bit: although Geoff Tanner puts the maximum amount of color, vibe, and soul into every Aurora Audio product, the GT8x2 Absolute takes the opposite approach. Geoff calls this Absolute due to the purity of the signal retained and the LACK of color that permeates the sound. Bussing and routing shouldn't be colored by a path whose job it is to go from point A to point B. If you are combining sounds that you already think are perfect, why would you want it changed by the time it gets to the destination?

The Aurora Audio GT8x2 Absolute is not only a part of the Aurora Audio expandable console, but a key unit in making your tracking and mixing sessions as professional as they can be.