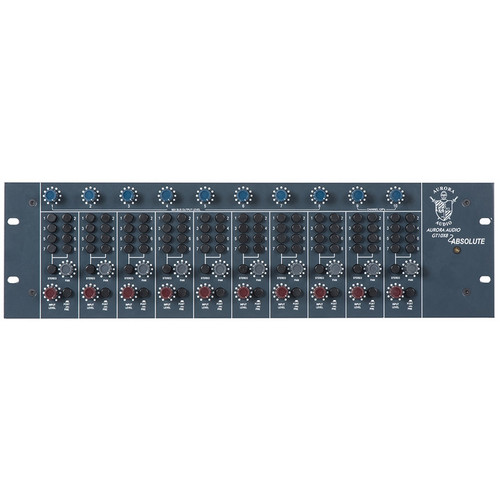 This item is currently on an extended backorder with the manufacturer. Due to limited supply, we do not know when we will have more. If you want one, then we highly recommend that you place your order now to get in line for the next one available. We will keep you updated as we are provided information from the manufacturer. If you have a deadline then please contact us before placing the order so we can meet your expectations.

The Aurora Audio GT10x8 Absolute is an 8 input, 8 output unit that enables the engineer to route line level signal where they need to for their session. Each channel on the GT10x8 Absolute has it's own input and output level control and pan, so you can determine the level and position in the stereo field (when you choose to use a send in stereo). Also included is a pre and post control that enables you to optimally choose if the mixer fader affects the level to the GT10x8 Absolute or not. Traditionally speaking, you would use the pre mode for a cue mix, while using the post mode for fx sends/mixing applications. But we know that special things can happen when using these modes in their non-traditional roles. To that end, Geoff gave the user 10dB of additional gain on the input control for maximum flexibility.

The Aurora Audio GT8x2 Absolute, provides the engineer with a powerful, linkable, and expandable line level bussing matrix. This way you can buss your signal around the GTM822-2GN console, creating more fx sends, returns , cue sends, and even the ability to get into more modern mixing techniques like parallel compression. Even with the smallest 8 channel Aurora mixing setup, you can make your mix sound like you were working on a console multiple times its size.