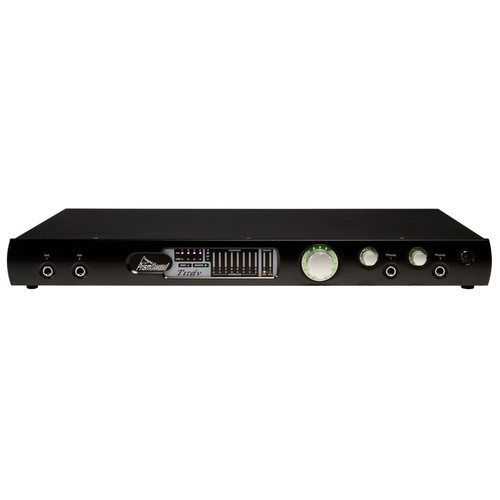 Signal path
Titan provides Prism Sound's renowned performance, sound quality and state-of-the-art clock technology in a dedicated unit compatible with both Windows (Vista and higher, 32 and 64 bit) as well as Mac OS X 10.5 and later (Intel). Once configured with a computer, Titan can also operate stand-alone using its S/PDIF or AES3 I/O. Eight analogue input channels and up to 10 digital input channels are available as inputs for your audio workstation software through the host computer's audio driver. Similarly, eight analogue output channels, up to 10 digital output channels and stereo headphone outputs can play 20 different channels. For low-latency foldback or monitoring to headphones or main outputs, each output pair (1-2, 3-4 etc or the headphone output) can optionally be driven from the built-in DSP mixer with an individual local mix of any selection of inputs through the controller applet. All analogue inputs are electronically balanced with automatic unbalanced operation. Analogue outputs are electronically balanced with 'bootstrapping', i.e. level is maintained if one leg is grounded.

Verifile
Verifile is a radical new proprietary technology exclusive to Prism Sound which allows computer audio streams and recorded files to be quickly checked for a wide range of clicks, errors and dropouts, without any compromise in the audio content or any additional metadata.

No-compromise, full Prism Sound audio quality
Titan makes no compromises on audio quality. It is the result of years of research and development into digital audio conversion and extensive dialogue with Prism Sound's customers.

Standards compliant USB interface
Prism Sound has taken on board the increasing importance of native processing power for professional users and the fact that software products for standard PC and Mac platforms have been greatly enhanced in recent years. Titan uses a USB2 interface. This is a UAC2 (USB Audio Class 2) interface supported natively in Mac, iPad, Linux and Android, and in Windows via a driver. Titan is easy to connect to your computer and to your outboard gear. For both Mac and PC platforms, there is a controller application to configure the unit and control its built-in mixer and other functions. Aside from the monitor and headphone level controls, everything else is operated solely from the Titan controller application. The controller software opens on-screen as a separate panel alongside your existing editing software.

Multichannel Digital Input and Output (MDIO) expansion
Atlas & Titan support Prism Sound’s MDIO expansion cards, which provide alternative “host” connections. The “host” is usually a computer and the Atlas or Titan interface provides a means of connection between the host and the external analogue and digital audio I/O ports. Without the MDIO expansion card fitted, the host connection would always be the default USB connection. The MDIO expansion slot provides an alternative host connection. It does not necessarily disable the USB port, but in the case of the Pro Tools interface MDIO-PTHDX, the USB port is switched off when the Pro Tools interface is to be used. Currently, only the MDIO-PTHDX expansion card is available. Others may be produced later.

Flexible Inputs and Outputs
Our customers told us that many professional users wanted a highly integrated solution with instrument and microphone inputs, and line outputs that could be used for stereo or multi-channel monitoring and/or foldback to performers. Titan offers eight analogue recording channels, eight monitoring outputs, stereo digital input and output on a phono connector plus concurrent optical digital I/O ports that can interface to S/PDIF or ADAT data formats, giving Titan a maximum capability of 18 concurrent input and output channels plus stereo headphones.

Low-Latency Digital Mixer
A built-in digital mixer can be configured from the host computer to provide foldback feeds to performers, each with their own stereo mix of workstation playback and any of the inputs. This provides console quality local mixing—each output has its own independent mixer, with channel strips for all inputs and workstation feeds, complete with fader, pan/balance pot, solo and mute buttons, and full metering. Strips can be stereo or mono, and the mixes are dithered with filtered coefficients, just as in a top-end digital mixer. With the Prism Sound DSP mixer, the latency is as low as 0.08 ms at a 192 kHz sampling rate.

Flexible Monitoring
To facilitate surround sound monitoring for HDTV and DVD, the eight analogue outputs allow monitor setups from multi-stereo up to 7.1 surround. The Titan's volume knob can be assigned to any or all of the analogue or digital outputs for use as a control room monitor level. There are two headphone amps, suitable for all types of headphones, each with its own independent volume control. As well as having its own workstation feed and mixer, the headphones can also be quickly switched across the other output pairs, which is handy for setting up.

Sample Rate Conversion & Noise Shaping
Prism Sound's renowned synchronous sample-rate conversion allows outputting to various external devices at other sampling rates. The sample rate converter can be used at the outputs as well as the inputs, so as well as dealing with unsynchronised or wrong-rate digital inputs, the Titan can also generate, say, a live 44.1 kHz output from a 96 kHz session. The digital output is equipped with the four Prism Sound SNS noise-shaping curves, allowing you to reduce to 16 bits for CDs at mastering-house quality.

Standalone Operation
The Titan can also operate in a standalone mode using its ADAT or coaxial digital I/O connections. Once set up using the Titan controller applet, the unit can be disconnected from the host computer and used independently. The Titan will retain its settings when powered down so even if it is switched off, it can be re-powered and standalone operation can continue with the automatically stored settings.