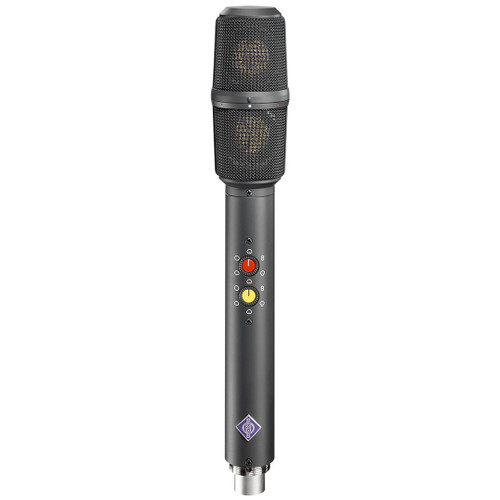 The Neumann USM 69i Stereo Microphone  is a one-point stereo microphone for XY- and MS-techniques. Featuring two large diaphragm capsules with 5 polar patterns each, the USM 69i is an excellent stereo mic for any musical application. This sleek black version is ideal for the studio or stage!

The Neumann USM 69i Stereo Microphone is a one-point stereo microphone for all coincident stereo techniques such as XY, MS, and Blumlein. Each of the two large diaphragm capsule systems has its own pattern selector with 5 positions; the upper system can be rotated over a range of 270°. The Neumann USM 69 i can also be used in mono with two directional characteristics simultaneously.

Two in One
The Neumann USM 69 i has two separate dual diaphragm condenser capsules, mounted vertically, which may be rotated against each other over an angle of 270°. The polar pattern of each capsule can be selected individually using two built-in rotary switches. Each capsule has its own head amplifier feeding separate pins of the XLR 5 output connector. The Neumann USM 69 i, thus, is two independent microphones in one convenient package. As it requires only one microphone stand, the Neumann USM 69 i is very easy to re-position for optimal results. With five polar patterns available for each capsule – omni, wide cardioid, cardioid, hypercardioid, and figure-8 – the Neumann USM 69 i allows for MS and XY stereo techniques in all variations, including Blumlein. Thanks to its low self-noise of 13 dB-A and its high SPL capability of 132 dB, the Neumann USM 69 i may be placed freely for best sound and imaging, with no worries about excess noise or distortion. An active subsonic filter protects the output transformers from overload due to structure borne noise.

Applications
The Neumann USM 69 i is an excellent stereo microphone for any musical applications such as vocal and instrumental ensembles, drums overheads, large instruments such as grand piano and harp, as well as solo instruments when stereo width and spatial movement is desired to enhance the listening experience. The Neumann USM 69 i is also a superb microphone for radio drama, and audio book productions with a sound similar to the acclaimed standard for spoken word, the Neumann U 87 Ai, but adding a stereo perspective.

Additional Uses
Apart from stereo applications, the Neumann USM 69 i may also be used to record a mono source with two different polar patterns simultaneously. Since both microphones inside the Neumann USM 69 i work completely independently, it can serve as its own backup microphone in high reliability situations. If one side fails or is inadvertently disconnected, the other side remains unaffected. Even in the rare event that DC converter for the capsule bias fails, the Neumann USM 69 i remains operational; both systems will automatically select the cardioid pattern and continue to work with just a slightly reduced sensitivity.