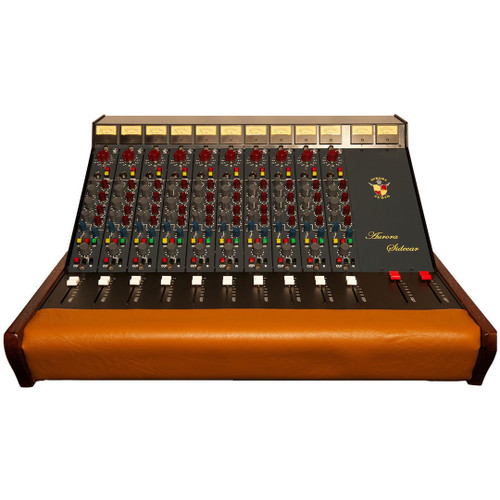 Traditionally speaking, sidecars were used to either add channels to a larger console or more often, add a different flavor available for tracking or mixing. The best example of a sidecar is the Neve BCM10, a broadcast console from the early 1970's. The parts needed for broadcasting would be disengaged and the 1073 preamp/EQ and busses would be used in conjunction with the main console or used in any way the studio seemed fit.

Now, these sidecars are about as rare as a hen's teeth. So after years of Aurora Audio manufacturing Class A discrete equipment, requests kept coming in for something bigger, better, and bolder than anything that Geoff Tanner and his colleagues had done before.

You said you needed this, so Geoff Tanner built it.

The ultimate has arrived: The Aurora Sidecar. Fifty years of electronic design and production experience, 40 of those years specializing in Class A discrete audio equipment, and 15 years of everyday practical experience by the Aurora Audio team manufacturing Class A discrete audio electronics used all around the globe, Geoff Tanner brings to you his highest achievement yet.

Each Aurora Sidecar console is built with a heavy gauge steel frame designed for years of use and abuse. Every channel features steel guide rails and heavy-duty thumbscrews, keeping all ten channels firmly in place creating an ideal connection between module and frame, making module insertion and removal easy.

While being built like a Centurion tank, the Aurora Sidecar also features hand crafted wood cheeks and a hand tooled padded leather armrest, providing the extra touch of prestige and craftsmanship that only Aurora Audio can provide.

The classic 4 Band EQ allows you to mold sound in ways you didn't think were possible. The 24 transformers that are living inside the Aurora Sidecar are designed and built to Geoff's specifications, giving you the clarity and punch that so many

chase and now you will attain with ease. The faders and bus path were designed to not only keep your sound pure and intact, but once it hits those busses, you will be in a Class A discrete paradise that until now, only the select few have been to before.

The way Geoff designed the layout and the Aurora Audio team executes the build of the Aurora Sidecar makes basic maintenance a breeze. And while you should have a qualified technician help you do any serious work on the Aurora Sidecar, Aurora Audio offers the option of purchasing an extra channel module that can be swapped out easily so you never lose valuable studio time on your project.