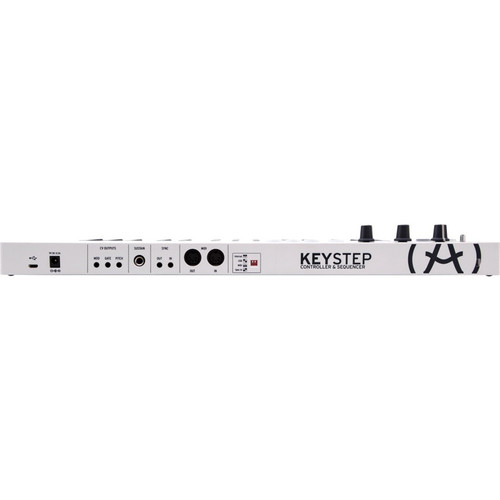 The Arturia KeyStep Keyboard Controller is a new breed of portable musical tool combining the functionalities of a keyboard controller with a polyphonic step sequencer to control both analog and digital devices.

The Arturia KeyStep Keyboard Controller is a full-featured USB MIDI keyboard controller complete with a polyphonic sequencer, arpeggiator, a robust set of MIDI and C/V connections, and outfitted with Arturia's new Slimkey keyboard for maximum playability in the minimum space. You need a portable USB MIDI controller but also want a keyboard that provides a musical playing experience? You have some MIDI modules you want to connect as well but don’t want the footprint of a large keyboard? You have modular and analog gear you want to control via CV/GATEs? You want a step sequencer with polyphonic capability that can sync to your favorite modern and vintage gear? If only a single piece of gear could do all of this…

KeyStep - One Objective Meeting Yours
Sometimes, simplicity is the key to efficiency and the best way to materialize an idea into a sonic result. The design of the Arturia KeyStep Keyboard Controller is based entirely on this vision. Going straight to the point, skating over the constraints and letting musicians focus on their art are Arturia KeyStep’s ambitions. Whether your setup is analog or digital, Arturia KeyStep will allow you to reach a whole new level of control and creativity.

Create
Never before has a portable keyboard controller incorporated this quantity of features. Having many devices, many plugins and many modules is a pleasure. Nobody makes secret of it. However, few things are more frustrating than accumulating instruments without being fully able to use them. Arturia KeyStep allows you to regain control over your instruments.Arturia KeyStep is loaded with features aimed at boosting your creative freedom. A 32-slimkey keybed with velocity and aftertouch, an 8-mode arpeggiator, a polyphonic sequencer with up to 64 steps and 8 simultaneous notes per step.

Perform
Like its brothers BeatStep and BeatStep Pro, the Arturia KeyStep is representative of a new breed of portable controller allowing musicians to free themselves from their computer, in particular in live conditions. The Arturia KeyStep is all about spontaneity and immediacy, strengthening the link that musicians can experience with their performance and their public. Each feature has been thought out to match live artists hopes and needs including real-time sequence rewriting, smart sequence-swapping function and simultaneous playing/sequencing. The Arturia KeyStep will give an unprecedented magnitude to your live sessions.