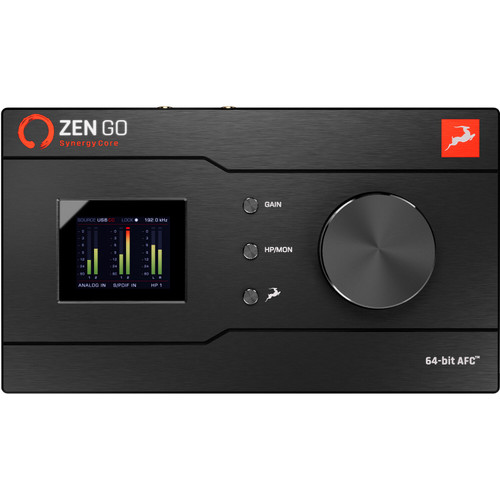 The Antelope Zen Go Synergy Core Audio Interface is the first ever bus-powered desktop interface packed with tech featured only in high-end professional studios, giving you instant access to premium sound quality wherever you are. The vast library of Synergy Core analog-modeled effects lets you shape your sound with precision and character – all while monitoring in real-time with imperceptible latency.

The Zen Go Synergy Core shrinks the sound-quality gap between artists, engineers, and producers with access to high-end studios and those working from home. The core technologies that placed our premium devices in some of the most revered recording studios are now accessible in a much smaller format at your fingertips.

Class-leading AD/DA conversion
Our converters offer up to 127dB of headroom and provide extended detail in the low-end, and sonic bliss found only in the most sophisticated studios.

Discrete console-grade preamps
Our ultra-linear console-grade transistor topology allows for recording with the highest fidelity and resolution, whilst sounding warm and musical on every source.

64-bit AFC technology
The 64-bit Acoustically Focused Clocking™ technology is taken straight from devices that have scored Hollywood’s biggest blockbusters and power some of the most prestigious studios around the globe.

Your studiois everywhere
The Zen Go Synergy Core is optimized for ultra-low latency recording, high-resolution playback, creative beat making and podcasting without hassle. With travel-friendly features and design, the interface can accompany you on your tours and on-location recording sessions, without sacrificing speed and efficiency.

Record with the sound of legends
We carefully picked a fine selection of 37 of the most useful and sought-after effects and included them with every Zen Go Synergy Core. This free library of analog-modeled compressors, EQs, mic preamps, guitar amps & cabs, along with our signature AuraVerb, gives you all the tools you’ll need to create stunning, sonically rich productions without spending any extra money. Beyond the 37 free effects, the ever-expanding Synergy Core library offers over 50 more as optional expansions – including emulations of classics such as Grove Hill’s Liverpool and Gyratec’s legendary EQs, as well as third-party effects such as Antares’ Auto-Tune and Inertia’s Instinct.