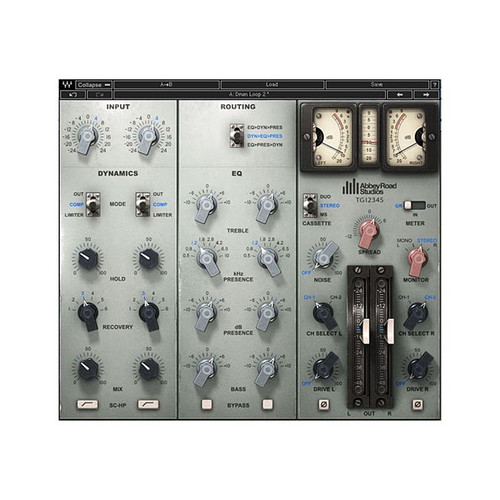 Product Code: 9999-11743
WANT A BETTER PRICE?!
Waves is always changing prices and offering specials, we just can't keep up. So, before you order, contact us and we will get you the very best deal possible on all your Waves plug-ins, bundles, and upgrades!
Get A Quote
$249.00

The Waves and Abbey Road Studios bring to life the legendary TG12345, the first-ever solid state console from EMI which helped shape groundbreaking recordings by the Beatles and Pink Floyd.

Waves teamed up with Abbey Road Studios to bring to life the legendary TG12345, the first-ever solid-state console from EMI which epitomized the sound evolution of the late '60s and early '70s and helped shape groundbreaking recordings by the Beatles, Pink Floyd, and many others.

Thanks to meticulous component modeling, the Waves/Abbey Road EMI TG12345 channel strip plugin captures every celebrated feature of the one-of-a-kind original console: the input mic preamp, down to every last detail of its harmonic distortion, hum and noise; the bass and treble EQ bands from the mic cassette; the presence EQ band from the console's group/main section; the lush-sounding spreader; and to top it all off, the console's famous compressor/limiter, with its distinctive, irresistible sound.

The plugin offers routing options that cover the entire TG12345 line, from the one and only MK I desk on which it was modeled, to the final MK IV models. In addition to the console's original features, new elements have been added to accommodate modern mixing needs, including a high-pass filter on the compressor's sidechain, a mix control in the dynamics section for easy parallel compression/limiting, a drive control, and much more. Whether used for tracking, mixing or mastering, in the studio or live, on an individual channel or on a master bus, the Waves/Abbey Road EMI TG12345 will give your mixes the beautiful compression and the unforgettable crisp, bright and rich sound of a true classic.