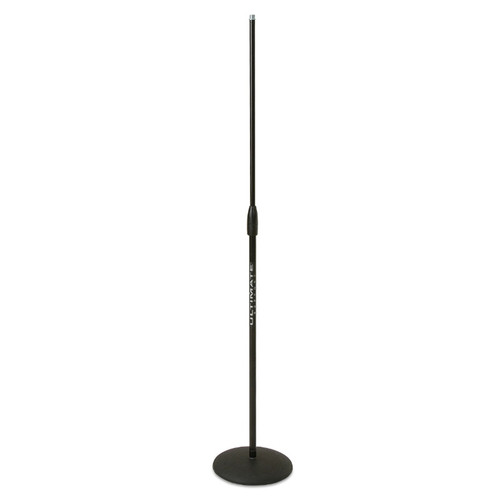 Innovation and strength are the two cornerstones on which Ultimate Support has built their reputation. The Classic Series microphone stands not only deliver features such as a quick-release, quiet, and reliable clutch, built-in cable management clips, and super stable bases, but they're competitively priced with mic stands that, well, simply don't stand up (pun intended). The MC-40 and MC-05 microphone stands are the finest professional mic stands you can find at entry-level mic stand prices.

Many price-competitive mic stands offer noisy clutch systems that are hard to tighten and release. The MC-05 clutch is super quiet, reliable, and impressively easy to tighten and release - which is a nice feature in the middle of a gig when you have to make adjustments quickly, or when a lot of different people are using the same mic stand in the same show.

Stable Weighted Round Base

With a sleek, round, cast iron base that is very stable and sturdy, the MC-05 is the stand of choice for schools, churches, bands, and other artists due to its traditional look and class-setting performance.

Easily Attached and Released Base

Quickly attach and release the base with just a few turns when, or if, you need to store or transport the base and shaft seperately. The MC-05 features a self-locking mechanism that won?t unthread unless you want them to. There simply isn?t an easier, more reliable design in this price range!