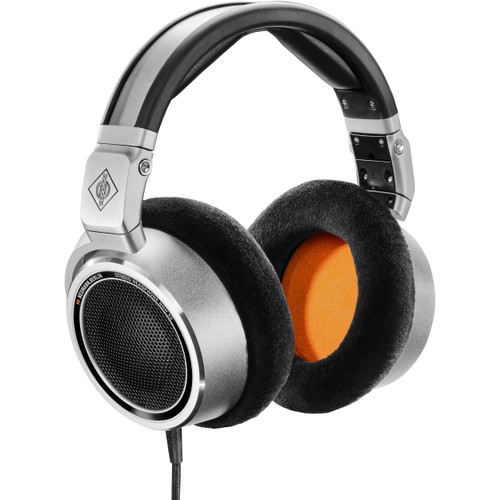 The Neumann NDH 30 Headphones are a circumaural, open-back headphone with outstanding detail resolution and high-precision stereo imaging with razor-sharp localization. Its linear soundstage and superior transient response recommend it for the most demanding applications such as mixing and mastering.

The NDH 30 was developed with the aim of making the reference sound of a Neumann studio monitor setup, perfectly calibrated via MA1, available everywhere in the form of an easily transportable headphone. At the same time, the NDH 30 forms its own sound reference in terms of headphone reproduction, which has become a key to success with the consumer. Its superior sound characteristics make the NDH 30 the first choice for mixing and mastering. Thanks to its high long-term comfort, it is just as excellently suited to high-precision editing. Its high-quality construction of spring steel and aluminum as well as its pleasant handling properties are largely the same as those of the NDH 20. However, the NDH 30 is an open-back headphone, which means that its dynamic 38 mm transducers work as acoustic dipoles. This allows their highly refined sound characteristics to unfold optimally: extremely fast transient response, dry bass, uncolored mids and transparent highs. In other words, the NDH 30 has no sound coloration, but reproduces the signal 1:1.

Uncompromising Precision
The NDH 30 owes its superior linearity, among other things, to frequency-selective absorbers that eliminate the overemphasis in the high frequencies that leads to incorrect mixing decisions in many other headphones. For example, the NDH 30 will accurately reveal whether a voice sounds muffled or needs a de-esser. The spatial resolution is impressive. The NDH 30 allows razor-sharp localization in the stereo panorama and makes the depth of the mix evident. To minimize channel crosstalk, the NDH 30 is supplied with a high-quality, cloth covered cable that is internally balanced.

Part of a Successful Family
With its high linearity and detail resolution, the NDH 30 is perfectly compatible with a loudspeaker system that has been optimally calibrated using Neumann Automatic Monitor Alignment. Mixes begun at home or on the road using the NDH 30 can be seamlessly continued in the studio using KH-Line loudspeakers – and vice versa. At the same time, the NDH 30 is recommended as a headphone sound reference; headphones, after all, have long become the dominant playback system among consumers. The NDH 30 is ideal for checking headphone compatibility and creating binaural mixes of immersive content (including VR and gaming). As consistency and reliability are essential in mixing and mastering, the NDH 30 is manufactured to extremely tight tolerances so each headphone sounds exactly the same.