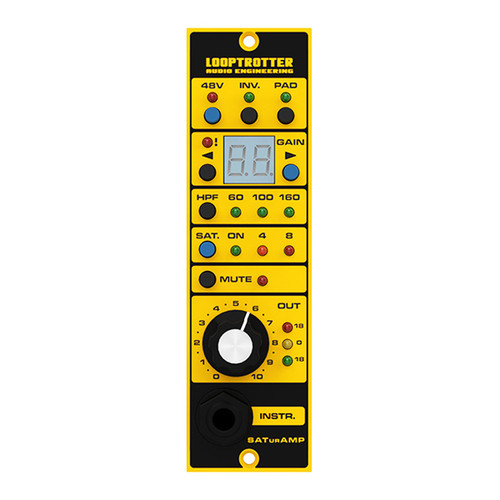 The Looptrotter SATurAMP 500-Series Preamp is one of a kind microphone / instrument preamplifier, equipped with an original saturation unit in rack 500 format. Due to this unique combination SATurAMP is a universal and creative tool, allowing the powerful sound, with great detail preservation, just while recording.

The SATurAMP is not only inspired by designs from the 60s, but also many original, modern ones, including digital control over the majority of functions. This particular solution allowed to eliminate the mechanic switches from the signal path, what considerably influenced the reliability and endurance of SATurAMP. The mechanic elements were replaced with hermetic relays and semiconductor switches.

On input in SATurAMP there is a SOWTER transformer based on the AP2620, found in legendary API preamps. The operating amplifier, build entirely of discrete elements, is responsible for amplification. Design refers to early operating amps from the 60s. However the solution of gain regulation comes from XXI century – it’s digitally controlled via micro buttons. The amplification value, expressed in dB, is shown on digital display.

The SATurAMP is equipped with high-pass filter with a slope of 12db per octave. There are three options of cut-off frequency, with three different characteristics:

The core of SATurAMP is originally designed saturation unit, known from Looptrotter SA2RATE, inspired by the sound of old tape recorders and analog consoles. It smoothes signal peaks, in intelligent and ear friendly way, adding low order harmonics. The saturation works like a soft limiter, making it possible to record tracks with high level of RMS signal, without the unwelcome distortion, sounding near, detailed, saturated and perfectly “sitting” in the mix. The instrumental input is based on discrete transistors, operating in class A. The appliance of FET transistor enabled the design of a unit, that enriches the signal with small amount of even, harmonic frequencies, positively affecting the sound of instruments plugged directly to SATurAMP. This refers not only to guitars and basses. SATurAMP works stunningly with digital synthesizers, adding this warm, analog touch. The signal path of SATurAMP is minimalistic, and applied elements are carefully selected with regard to original sound character signed with Looptrotter. SATurAMP represents the highest quality sound combined with original, analog touch. The SATurAMP is 100% original design and has no equivalents either analog or digital.