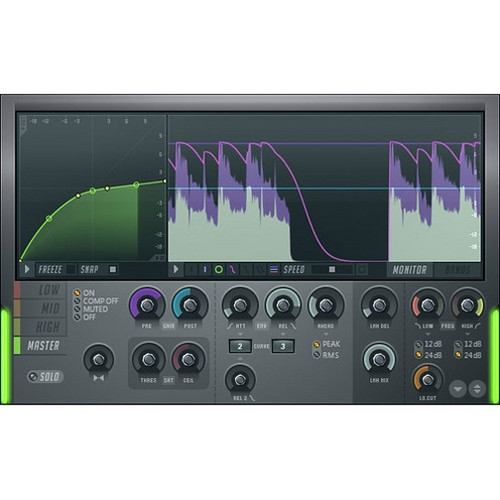 Maximus will deliver transparent peak limiting and volume maximization without coloration of the processed sound.

Image Line Maximus Details
Maximus will deliver transparent peak limiting and volume maximization without coloration of the processed sound. However, Maximus is much more than a pristine quality Mastering Maximizer, it's also a Compressor, Limiter, Noise Gate, Expander, Ducker and De-esser. Maximus excels equally well as a final mastering plugin or as a per-track effect. Lock and load.

Heavy weaponry for the loudness war.
Maximus will quickly become one of the most rewarding tools in your recording and mixing arsenal. Maximus applies level maximization via compression and/or limiting across three frequency bands, to enhance and improve the final track. Used sparingly, Maximus raises the volume of the track without introducing unwanted distortion and ensures that the quieter parts, often lost in the mix, are more easily heard.

More presence
Maximus offers 4 user definable compression curves and complete visual analysis of the sound as it is processed. Bass can be increased and higher frequencies sharpened. Selected elements of a mix, instruments or vocals for example, or complete tracks are given a professionally mastered 'presence'.