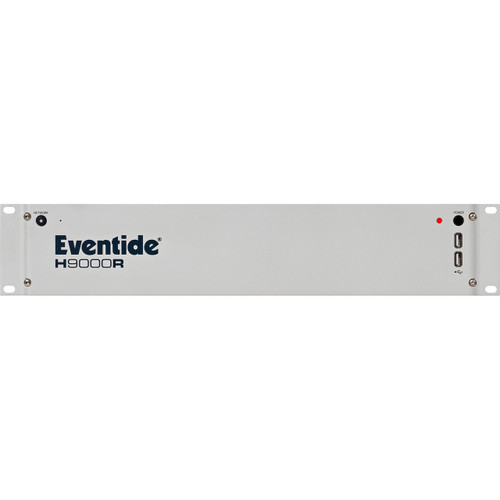 The H9000 is riding the crest of a wave that’s about to sweep over the audio industry - multi-core general purpose ARM processors. Compared to conventional DSP chips, ARM processors deliver more processing per dollar and they significantly streamline new algorithm development. The migration to ARM represents an unprecedented investment for Eventide, an investment that far exceeds any other in our long history. Why did we take this step? Because ARM chips are engendering new, previously unimaginable audio effects and audio applications.

Colossal Audio I/O
Audio I/O includes: 8 channels of pristine analog audio, 16 channels over USB, 8 channels of AES/EBU, ADAT optical and S/PDIF. Plus optional network audio I/O via 3 expansion card slots with up to 32 channels of bidirectional audio each. (Dante and MADI available now, additional expansion cards are under development.) With up to 96 channels of simultaneous signal processing and a generous complement of analog and digital audio I/O, the H9000 is the perfect platform for surround sound and for processing many tracks of audio simultaneously.

H9000 Screenshot of FX Chains
In addition, the H9000 introduces the concept of FX Chains for connecting any set of four effects with user-defined, flexible routing. FX Chains can be created to act as a channel strip, a guitar 'pedal board,' a modular synth with effects, etc. The H9000’s FX Chain paradigm is like a custom channel strip on steroids allowing any four complex algorithms to be combined and routed to taste. FX Chains are invaluable for quickly exploring various combinations of effects to achieve new and inspiring sounds.

Intuitive, Powerful Interface
The most gratifying comments that we've received about the H9000’s interface is that it feels right. Words can’t properly convey what makes the H9000 feel good to use, but we can say a lot of attention to detail went into crafting its interface. The H9000’s big wheel is custom machined and has been carefully weighted to give it the right amount of inertia when spun. The H9000’s custom designed buttons were chosen for their particular tactile response. And the H9000’s large, crisp color display is driven by a dedicated ARM processor to ensure that the H9000 feels fluid and responsive when used.

The H9000’s core functionality is encapsulated in the four mode keys SESSIONS, FX CHAINS, ALGORITHMS, and PARAMETERS. User presets of Sessions, FX Chains, and Algorithms can be saved and recalled.